Mr Sibal, you ain’t fooling anyone! 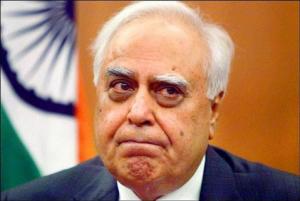 Kapil Sibal, former telecom minister in the UPA government, in an Oped article in Times of India (May 2, 2017) today, has urged “Asli Hindus” to distance themselves from Hindutva which, in his view, is nothing but fundamentalism in the name of Hinduism and mirrors intolerance, casteism and a sedition-happy government.

The trouble is Sibal saying so is like the devil quoting from the scriptures. He was the father of the notorious amended 66A section of the IT Act under UPA which could land anyone in jail for three years for “offensive” tweets. Anyone arrested had to apply for a bail under this cognizable offence.

The need for this draconian measure was to crush dissent against the corruption in the UPA government. A Jadavpur University Professor, Ambikesh Mohapatra, was arrested in April 2011 for merely forwarding on email a cartoon on Mamata Banerjee. Similarly, cartoonist Assem Trivedi, in solidarity with Anna Hazare’s crusade against corruption, was arrested and had to shut-down his website.

This was like an Emergency; a true muzzling of freedom of speech and expression. In the end, Supreme Court had to step in and squash the amended 66A Act, terming it “unconstitutional.”

This “unconstitutional” move went all the way up to your door, Mr. Sibal. It isn’t like Una, Dadri or Alwar where Modi government is being dragged for no role of their own.

Indeed, such outrageous were your moves and utterances as a minister, that Supreme Court had to intervene once again and bring the guilty to book. I of course am referring to the 2G Scam.  It was you, as telecom minister, who rubbished all the investigations under the 2G spectrum scam, be it of Comptroller and Auditor General (CAG), CBI, Justice Shivraj Patil report, or by the one of telecom regulator, TRAI.  You even made the absurd claim that your predecessor A. Raja’s spectrum allocation in 2008 caused no loss to the exchequer!!! It was only after Supreme Court bristled in anger that you had to buckle down. It’s a reminder to you readers that 2G scam was worth 170,000 crores.

After such a “distinguished” record as one against the dissent or contempt for authorities such as CAG and TRAI, don’t you think your moral stances are a little facile? Do I need to remind you of the “intolerance” of Pt. Jawaharlal Nehru against iconic poet Majrooh Sultanpuri who was put behind bars in Arthur Jail Road in Mumbai for a year for a rebellious poem penned by him? The poem went something like this:

(Who has stopped the flag of peace from blowing in the air on this land? Is this someone a disciple of Hitler and we must not let him get away with this. Nehru is no better than a slave of Commonwealth and he ought not to be allowed to get away with it).

Do I need to remind you of the number of sedition cases which were filed while UPA was in centre? Or films which were banned by Congress? And who amended Article 19 (I) to rob people further of their freedom of speech?

This “freedom of speech” and “intolerance” nonsense against the Modi government which is being used to put them in a corner on the Hindutva issue isn’t cutting much ice with the voters of this country. “Asli Hindus” aren’t willing to be drugged any further by anti-India left-liberal-media factions. Newspapers like Times of India could reserve the best space in its edition for your harangues but trust me the people of this country don’t give a damn. Divide and rule won’t work in today’s India.