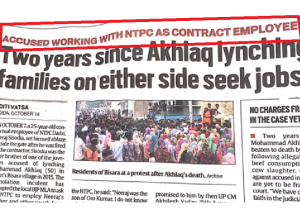 Not a day passes when Indian Express doesn’t peddle in Fake News. The latest to catch my attention was on Sunday, the slug of which read: “Accused working with NTPC as contract employee.” (see pic).  This is with reference to a juvenile accused in the murder of Mohammad Akhlaq in a Dadri village two years ago.

Maybe the newspaper is following the decent practice of not naming a juvenile till the charges against him is proved. (Never mind though the newspaper went to town in naming five “suspects”—or Sanatan Sanstha–for killing Gauri Lankesh which even the Special Investigating Team (SIT) know nothing about!).

NTPC promptly came up with an official rejoinder within a few hours of the Indian Express story. Pankaj Saxena, spokesperson for NTPC, Dadri, said as for juvenile accused being offered job “…none of them have been employed.”

This Express “rocket” had been launched on a carefully prepared communal ground. Express links the story to the BJP MLA of the constituency, Tejpal Nagar, for recommending a job. Recommending the job to the accused? No, but to the ‘bhabhi” of the accused! And is the “bhabhi” employed by the NTPC? No. Then who the hell is this accused juvenile who is working with the NTPC as contract employee about whom the newspaper has gone to the town? And about whom the BJP MLA is somehow projected as favouring in the background?

After naming BJP MLA Tejpal Nagar as favouring the family of this ghost-of-a-juvenile-accused, the Indian Express states that the NTPC hires locals “through a contractor, in this case an MLA.” A non-suspecting, gullible reader would immediately presume that Tejpal Nagar and this MLA are the same person. But “an MLA” is not “the MLA” and thus the Indian Express cleverly has covered its tracks, without dousing the insinuation.

In a rush to pull the wool over its’ readers eyes, Express doesn’t follow some basic journalistic principles. It makes no effort to explain what is an NTPC in this four-column story. NTPC is an acronym of National Thermal Power Corporation.

Predictably, Indian Express doesn’t carry the official rejoinder of NTPC in its today’s edition. May be it would in days to come or spin a new fantasy. The Fake Train of Indian Express keeps hurtling down its rubbery track at a breakneck speed every day without a care in the world for journalistic ethics or its paying readers or worrying about the censure from the Press Council of India. It remains un-derailed for the laws of this land have its hands full with the stains of a firecracker. Who has the time to be a vigilante on Holy Cows of Lutyens’ Media?

(Facebook has set out 10 tools to check Fake News. A few give-aways are headlines, source, evidence and photos. Indian Express on Thursday’s edition has been found out in peddling a Fake News).