Mughal Museum in Agra to be named after Shivaji, declares Yogi 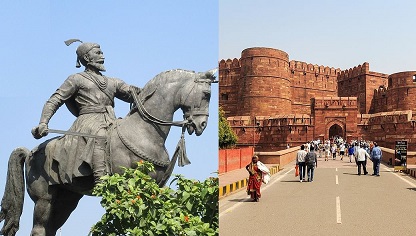 The under-construction Mughal museum in Agra would be named after Chhatrapati Shivaji Maharaj. Declaring so, Uttar Pradesh chief minister Yogi Adityanath said the name of Shivaji would “invoke the feeling of nationalism and self-esteem,” in people.

The decision was taken in a meeting held at the residence of the chief minister.

Later Yogi Adityanath tweeted: “Agra’s under-construction museum will be known by the name of Chhatrapati Shivaji Maharaj. In your new Uttar Pradesh, there is no space for the symbols of “the mentality of slavery’. Shivaji Maharaj is our hero. Jai Hind, Jai Bharat.”

The foundation of the Mughal Museum in Agra was laid in January 2016 by then chief minister Akhilesh Yadav.

The museum, which is to be built on about six acres of land near the eastern gate of the Taj Mahal, was conceived with an interest to make it attractive to tourists.

Shivaji’s famous escape in a fruit basket while being held prisoner by Mughal emperor Aurganzeb from the Red Ford, Agra is the stuff of legend.