NaMo on certificates is a no-no: But what about CMs of Congress-ruled states? 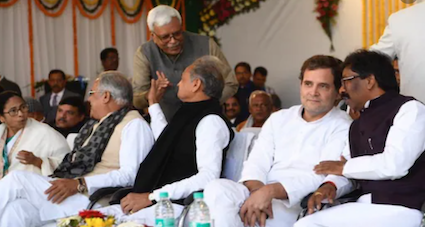 While Congress has been posing questions on Prime Minister Narendra Modi’s photo on covid -19 vaccination certificates, its states Jharkhand and Chattisgarh are rolling out its certificate with state chief minister’s photo.

Chhattisgarh is issuing its certificate with state chief minister Bhupesh Baghel’s photograph for vaccination of the 18-44 age group.

Two days back, Jharkhand also replaced the photo of PM Modi with that of its Chief Minister Hemant Soren. Ashok Gehlot-led Rajasthan government has also shown the same interest.

It is important to note that Congress was the party to object to PM Modi’s photo on the certificate.

“My younger son, who is currently pursuing his education in the UK, got his first shot in London. No photo of Boris Johnson on the certificate, unlike what occupies pride of place with flowing beard on the CoWin certificate in our country.” he had tweeted from his handle.

Meanwhile, it was cleared by the Health Ministry earlier only that the states can provide “interim certificates but the final vaccination certificate would have to be issued by the Centre as per policy.”