No Gandhi but there could be many Godses 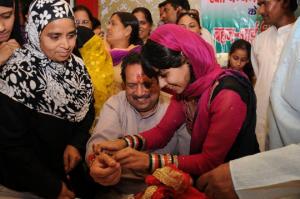 Nathuram Godse killed Mahatma Gandhi on 30th January 1948. We also know the provocation was Gandhi’s insistence to newly-formed Indian government that Pakistan be paid the obligated Rs.55 crores from the treasury.

Godse’s full statement in his trial was banned for 20 years till the Bombay High Court lifted it in 1968.  It bears a reminder now for both Hindus and Muslims lest a similar communal frenzy overtakes the nation in our lifetimes, abetted by forces who don’t have the interests of Muslims, certainly not of Hindus, and most definitely not of the nation we know as India.

Godse believed Muslims were appeased by Gandhi at the cost of Hindus. He cited several instances such as Khilafat Movement in the early 20s; the move to separate Sind from Bombay presidency in 1928; Mahatma’s “neither support nor opposition” to the Government of India Act of 1935 which allowed elections on communal lines and prepared the way for the horrific Partition; and the Great Calcutta Killings and Noakhali Riots where lakhs of Hindu men and women paid with their lives and honour.

The Muslim League feared Hindu domination. Hinduphobia was built upon by Jinnah and other leaders of the Muslim League, abetted by British policy of “divide-and-rule.” Gandhi’s desire for a united front of Hindus and Muslims against British never materialized. His doctrine of Ahimsa didn’t work. It only caused rivers of blood to flow in front of his eyes. His turned out to be violent pacifism.

Fast forward to modern times. Muslims perceive a hostile climate against their lives and food habits abetted by the central BJP government. They don’t stop to question:

(a)if BJP indeed is communal how come it doesn’t react to hundreds of Hindu killings in Kerala and Bengal? Why Advani’s Ayodhya’s rath-yatra was completely bloodless;

(b)How come its first act was to provide new subsidy to Islamic schools;

(c)If BJP indeed was fundmanetalist, how come the most strident Hindu voices such as Arun Shourie and Dr. Subramanium Swamy were never inducted in the Cabinet?

(d)Every time a stray voice, such as Sakshi Maharaj or Jyoti Niranjan go extreme, the government most vehemently come down on it;

Hindus have their own grouse.

(a)Hindus pride in their religion is termed as “bigotry”;

(b)Hindus can’t come to terms with Ayodhya where Rajiv Gandhi himself had allowed Hindus to worship in 1986 and where all the eminent historians, such as Romila Thapar and Irfan Habib were shown to be manipulating history and archeology by the three-member jury;

(c)Hindus detest when their nose is rubbed on the ground on their cultural sensibility, such as “jallikattu”, “Durga Puja”, “Padmavati” among others;

(d)They feel helpless when the organized intelligentsia of this country (media, academia, Left-Liberals) deny them the platform to air their views. Their viewpoint is never represented;

Above all, Hindus feel that media/Left-Liberals/academics for too long have played the role of British “divide-and-rule” in this country. Fed by foreign money and preachers, missionaries of specific countries of monotheist religions such as Islam and Christianity, every effort is being made to make a pagan religion like Hinduism suffer, and if possible, to disappear.

Englightened Hindus feel aghast that their Muslim brethrens can’t look at the example of the Vajpayee government (1998-2004) and see through this game.

(a)These very same experts had predicted Hindu fascism and that “all Muslims into the Indian Ocean” under the Vajpayee regime;

(b)Despite the Kargil outrage in 1999, Vajpayee stopped the Army to strike across the border at invaders’ base;

(c)It was BJP which had thrown the Indian media market open to foreign media ownership despite the strident opposition by these very forces who today champion the idea of “freedom of speech.”

Hence, I propose a following manifesto for Hindus and Muslims for the safety of their future generations and unity of India (for god’s sake, how many divisions you want, you stupid):

(b)That we would learn our historical lessons and wouldn’t allow India-breakers to play on our fault-lines;

(c)That we would see each other’s point of view on cow-slaughter, such as food habits and religious sensibility and accommodate each other strictly on the laws of the land;

(d)That Hindus would come forward on killings in the name of cow-vigilante and Muslims likewise would question the media’s narrative on Bengal and Kerala as well as constant attempt to denigrate our armed forces;

Above all, our religious moorings shouldn’t be allowed to override our concern for One India, One Unity. A Uniform Civil Code isn’t an attack on Shariat. And if it is, Muslims anyway submit to such rulings in France or Australia. The majority in this country has chosen BJP to lead India’s destiny till 2019 and we ought not to let our communal prejudice or bias interfere in its task.

And certainly not allow these India-breakers a field day. They are desperate and fast losing ground. Their propaganda has no effect on the electorates. India is a virtual heaven in modern comity of nations. Muslims are safer here than in any other non-Muslim country of the world. We shouldn’t become a pawn to a handful of India-breakers who are subsisted, funded and promoted by foreign forces.

Just remember: we can all wear our religious glasses but it must show the horrible future which our children would suffer in times to come.