No plan to impose lockdown in the Capital, says Delhi’s health minister 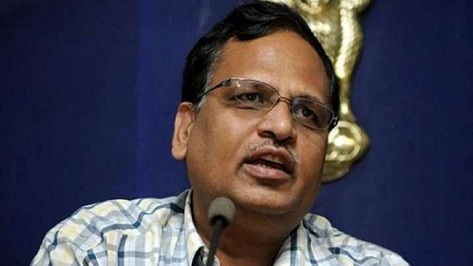 There are no plans to impose lockdowns due to surging Coronavirus in the Capital, it was announced by Delhi health minister Satyendra Jain here on Monday.

As per Jain, the third wave of Covid-19 has already peaked out. “Don’t think it will be an effective step now, wearing of masks by everyone will be more beneficial.”

The Delhi health minister claimed that fine worth Rs 45 crores has been collected so far from “defaulters” who don’t wear mask and do not following social distancing norms in public ara.

Jain also mentioned the meeting between Union home minister Amit Shah and Delhi chief minister Arvind Kejriwal in this regard on Sunday evening.

The Centre has asked for additional measures such as doubling the number of daily RTCPR test. Amit Shah has also assured that hospitals under municipal corporations of Delhi would be turned into dedicated Covid hospitals. There would be an additional 750 ICU beds.

The Union home minister has directed paramilitary forces to arrange more doctors in Delhi. Some 75 doctors and 350 paramedical staff would be in Delhi in next few days.

Delhi is witnessing a surge in coronavirus infections. The Capital registered its highest single-day spike of 8,593 cases on Wednesday.  On Sunday, however, Delhi recorded 3,235 fresh COVID-19 cases, the lowest since October 26, taking the infection tally in the national capital to over 4.85 lakh, while the positivity rate increased to 15.33 per cent.