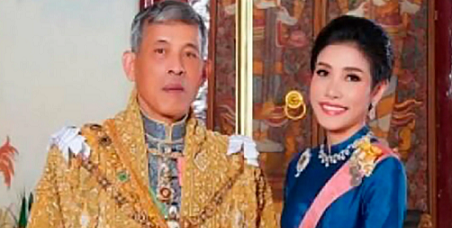 With the palace intrigue goes digital, the king of Thailand, Maha Vajiralongkorn faces a new set of embarrassment. His mistress, Sineenat ‘Koi’ Wongvajirapakdi has become the target of bizarre revenge as her hundreds of nude photos got leaked to an anti-monarchy activist.

According to a report, more than 1,400 images, taken between 2012-2014, – with many of them sexually explicit, were allegedly leaked earlier this year to prominent critics of the Thai monarchy living abroad. The act appears to give a very modern twist to the age-old rituals of court rivalry.

The alleged photos were sent to British commentator on Thai affairs, Andrew Macgregor Marshall and to Pavin Chachavalpongpun, a Thai academic who lives in Japan and faces criminal prosecution in Thailand for criticizing the Thailand monarchy.

Marshall, in his Facebook post, told that he had only decided to disclose this as Chachavalpongpun had done so but unlike him, he is not going to publish her photos as they are very intimate and were sent without her consent.

He said that he received an SD card, with what he assumed was a “fake return” address.  Marshal continued his analysis of the photos stating that “the photographs are clearly from Koi’s personal phones”

“Most of the images are photographs she took of herself, and dozens of them are very explicit. It seems probable that she had taken these explicit photographs of herself to send to Vajiralongkorn.” He added further.

Marshall also commented on the “timing” of the photos and said it was “clearly an attempt to sabotage” the consorts return to the royal family.”

“When you are a monarch with a wife and queen and you appoint consort, it is a recipe for vicious infighting,” he explained.

Koi was released from detention earlier this year after spending ten months at a correctional facility. She had been accused of feuding with the queen, but has now been declared “untainted” and restored to her role as 68-year old King Maha Vajiralongkorn’s official consort.

According to the critics of Thai monarchy, her return was highly opposed by the King’s wife Queen Suthida and Princess Bajrakitiyabha and the leak of the “very explicit” photos of Koi can be seen as an extension of the bitter rivalry between them (mistress and queen)

The 67-year-old Thai king had named Sineenat as his royal consort in an elaborate ceremony in 2019. It was done just three months after he married Queen Suthida, his fourth wife. Queen Suthida was a cabin crew member in the Thai Airlines earlier. The king, who took the throne in 2019, had divorced his first three wives.