Okay, Pak wants Gilgit-Baltistan as its 5th province; But what is India doing about it? 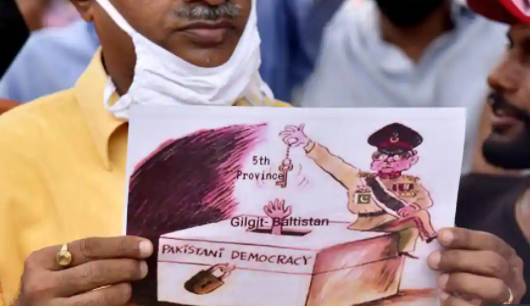 Maharaja Hari Singh acceded whole of his princely state to India on October 26, 1947, as Pakistan attacked his territories. The state was then spread over 2,22,236 square kilometres, and of this only 1,01,437 square kilometres is with India now. More than half of it is being illegally occupied by Pakistan and China, located to our east, north and west.

It needs to be pointed out here that none of the areas under Pakistan and Chinese control have been ceded officially by India. It has been due to wars, coupled with salami slicing by China, and treachery that we have lost control over those areas.

One of the largest areas of illegally occupied territories in Pakistan’s control is Gilgit-Baltistan which it plans to make its fifth province. A territory over which Pakistan had announced its control on November 2, 1947 but the claim has no legal basis.

Gilgit-Baltistan area is strategically very important and had been taken on 60-year lease by the British in 1935-36. This lease was a result of strong arm tactics applied by the British on the Maharaja. However, in 1947, the British announced their intentions to return the territories to India.

Responding to the British request, Maharaja Hari Singh appointed Brigadier Ghansara Singh as administrator of the areas. The Maharaja’s appointee took charge from Major Brown who was heading Gilgit Scouts. Brigadier Singh was treacherously arrested on October 31 and on November 2, Pakistan put its flag there.

Facts stated above make one thing clear that these areas have been illegally occupied by Pakistan since 1947. Pakistani forces gained control over these areas through treacherous behaviour of some elements of the Gilgit Scouts and due to sheer luck.

At one time, Gilgit-Baltistan was predominantly a Shia-majority area, where Ismailis also lived in substantial numbers. From being 80% of the area’s population, the number of these people has come down by half to almost 40% now. This has happened because Pakistan has encouraged Sunni Muslims from Punjab, particularly ex-servicemen, to settle in these areas and change the demographics.

Pakistan has now announced that it will hold elections in Gilgit-Baltistan on November 15, and then make these areas as its 5th province. In fact, this is something that Pakistan had started in right earnest in 2009, over 11 years earlier.

That is a question the Indian government will do well to answer. Awareness about GB, a part of Ladakh, among average Indians is abysmally low. After Article 35 A had been scrapped on August 5, 2019, te Central government issued new political maps of the newly carved out Union Territories (UTs) of J&K as also Ladakh.

In these maps, GB was shown as part of the newly carved out UT of Ladakh. It is at the cartographic level that a large number of Indians learnt about these areas then. Even territories of Pakistan Occupied Jammu Kashmir (POJK) were clearly marked as part of the UT of J&K.

The issue was mentioned by the Indian foreign minister S Jaishankar at meeting of the SAARC foreign ministers recently. Not that SAARC has been of much use in resolving other bilateral issues India has with Pakistan. Yet, informing all the neighbouring countries of the Indian point of view is what was achieved through this.

Incidentally, Pakistan seems to be inching closer to China with every passing day. The attempts at holding elections in GB are also in tune with this growing closeness. It can be mentioned here that China Pakistan Economic Corridor (CPEC) passes through parts of GB. By firming up its hold on GB areas, Pakistan hopes to ingratiate itself with China.

Over the past many decades, Pakistan has firmed up its image as a freeloader living off other nations. For most part of its existence, it has been aligned with western powers lead by the US. This brought in money and arms, mostly as grants and gifts, for which it hardly paid anything.

Pakistan now seems to have aligned itself with China, and jettisoned the US. However, there is difference between the US and the Chinese money. From the US, and its allies, most accruals to Pakistan were outright grants, gifts and donations. In contrast, whatever money has come to Pakistan from China has been in the form of loans. The terms and conditions attached with some of these loans are fairly stringent.

From being client state of the US to becoming a client state of China is just an easy 180 degree turn for Pakistan with no compunctions. Its plans for GB are in tune with this clear selfish thinking driven by its pauperization. What will be the consequences of further moves in this direction can’t be predicted right now.