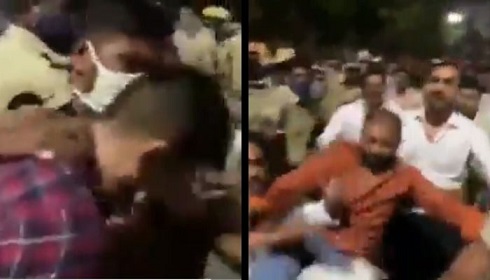 In another violent attack on journalists, Congress leader Feroz Khan has been arrested by Hyderabad’s police for brutally assaulting an ANI reporter during a protest rally against the Hathras rape case.

On Thursday, several Congress workers including Telangana Pradesh Congress Committee chief, Uttam Kumar, gathered in a large number near the Ambedkar statue to register their protest against the detention of their leader Rahul Gandhi and Congress General Secretary Priyanka Gandhi Vadra during their visit to the victim’s family in Hathras.

Abdul Basheer, the ANI reporter was also presented at the protest site and when he was trying to cover the incident, he got into a heated argument with Feroz Khan. Soon the argument turned into a violent fight where the reporter can be seen pushed and thrashed mercilessly by Khan and his supporters.

The video of the incident where Feroz can be seen abusing the reporter went viral on several social media platforms. It is also clearly visible in the video how the Congressmen misbehaved with police officials too. It was after the ACP intervention that the matter came under control.

While talking to one of the news channels, Abdul Basheer said,

“He (Feroz Khan) barged with his party workers and pushed me, I asked him why you pushed me, if you want me to move I will move aside, he used foul language against me. I went and complained to the party president. He (Feroz Khan) was right in front of me when I did that. And after I moved out, that person came close to me he picked up an argument and hit me, There were people attacking from all sides, I was completely surrounded.”