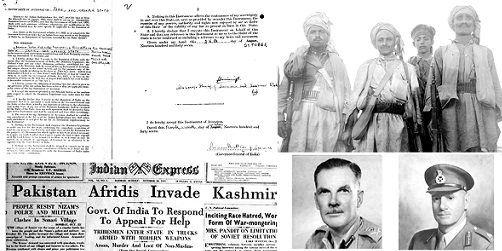 Jammu and Kashmir has remained a critical issue before the Indian government ever since independence and creation of Pakistan on August 14/15, 1947. Officially, the Pakistan government had started preparing for forcefully annexing the Princely State of J&K the moment it came into existence. A Sikh officer, Major O S Kalkat, had learnt about Operation Gulmarg plan as early as on August 20, 1947.

Incidentally, Kalkat retired decades later as a Major General after serving the Indian Army with distinction. He has recorded all the details of Pakistan Army plans in a book he wrote. He has explained in considerable detail as to how he stumbled upon these plans by chance when he served at HQ Bannu as Brigade Major under Brigadier C P Murray.

Brigadier Murray was on an official tour to Mirali outpost at that time. On August 20, Major Kalkat received a telegram marked “Personal/Top Secret” addressed to his Brigade Commander. The letter was from Pakistan Army’s Commander in Chief, General Sir Frank Messervy, another British officer.

Major Kalkat opened this letter in good faith so that he could convey whatever it’s contents were to Brigadier Murray. He was aghast when he found details of Pakistan Army plans regarding Operation Gulmarg which was to carry out an attack on the territories of J&K to forcibly annex it to Pakistan. The secret letter, from one top British officer to another, had just fallen into unsuspecting Major Kalkat’s hands by a strange coincidence.

He hastily got in touch with Brigadier Murray and explained details regarding Operation Gulmarg plans. The Brigadier asked Major Kalkat to not say a word about the letter to anyone. Or else, he will not be allowed to leave Pakistan alive. At that time, the young major’s family was at Mianwali, a nearby venue which had also got included in Pakistan.

Somehow, some Pakistani army personnel got suspicious of Major Kalkat, who did what he was told by his boss, and feigned total ignorance about the letter. He was virtually put under house arrest and not allowed to go out anywhere. However, he made a daring escape and reached Ambala on October 18, 1947.

From Ambala, he boarded a goods train to reach Delhi so that he could inform the top military personnel there. Accordingly, he met Defence Minister Sardar Baldev Singh, Brigadier Kalwant Singh and Col Thapar the next day, October 19. He explained to them all the details of Operation Gulmarg that he knew. He told them that according to these plans, full scale Pakistani attack on J&K was to begin on October 21/22, still two/three days away.

Major Kalkat tried to convince them all that J&K was seriously in danger and this information should be handled with utmost alacrity. He said that under the Operation Gulmarg, each Pathan tribe had been asked to gather a lashkar of 1,000 tribesman. These lashkars had gathered at Bannu, Wana, Peshawar, Kohat, Thal and Nowshera by first week of September. They were then provided arms, ammunition, essential items of clothing and transport vehicles by the Deputy Commissioners and Political Agents.

Major Kalkat said the plans had envisaged issuance of these items to the lashkars while officially (on paper) these items were shown as issued to different Pakistan Army units.

He also said that each lashkar was to be provided a Major, a Captain, 10 JCOs of the regular Pakistan Army. The Major was to be the actual commander of the lashkar and act as “Advisor” of the tribal Malik, who was nominally in command of the unit.

The Captain was to act as Staff Officer of the lashkar while each of the 10 JCOs was to be in charge of a company, or group of the lashkar. The entire force was to be commanded by Major General Akbar Khan, who was given the code name Tariq. He was to be assisted by Brigadier Sher Khan. Their HQ was located in the same building as C-in-C of the Pakistan Army, General Sir Frank Messervy. Of course, General Messervy was privy to all these plans as clear from the letter that Major Kalkat had read on August 20.

A dejected Major Kalkat then left Delhi when he was not taken seriously by the Defence Minister and senior military officers he had met. He then started looking for his family in the camps of East Punjab.

Some days later, Operation Gulmarg started as per plans and it was only then that Sardar Baldev Singh realised his folly. He explained all that had transpired between him and Major Kalkat to Prime Minister Jawaharlal Nehru. The invaluable information that Major Kalkat had provided was rendered infructuous because of this indifference and apathy.

The Indian authorities then started frenetic efforts to locate Major Kalkat and it was only on October 24 that he could be found in Amritsar. He was taken to PM Nehru thereafter who shouted at the Defence Minister as also military officers who had accompanied him when Major Kalkat unveiled details regarding Operation Gulmarg.

Till date, over seven decades later, we perhaps often err in terming the attacks on territory of J&K in October 1947 as tribal or kabaili attacks. These were outright planned and executed by the Pakistani Army and even the top British officers of the day had played a part in them. For several months after these attacks were launched, Pakistan Army continued to deny any direct involvement.

The Indian Army launched counter attacks on October 27 only after Maharaja Hari Singh had signed the Instrument of Accession joining India a day earlier. Imagine the invaluable advantage that could have accrued to the Indian troops had the information been processed urgently by Defence Minister Sardar Baldev Singh. If only he and others who had ignored and made light of Major Kalkat’s revelations acted differently.

All these details are available in a book titled “Operations in Jammu and Kashmir, 1947-48” published by Ministry of Defence, Government of India. It has been brought out by History Division and was published by Natraj Publishers, Dehra Dun. Its last re-print was brought out in 2005 and it is out of print again.