Our Lordships want TV news to be regulated; Who do you have in mind, if I may ask? 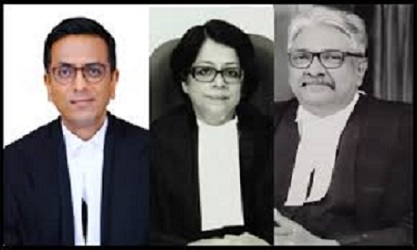 I am in Kasauli, with my family, a cheerful environment, which was only made better by what I read today.

Justice Chandrachud, His Lordship of the Supreme Court, doesn’t want the digital platform to be regulated as much as electronics media in this country.

I must give the background to place the matter in appropriate context.

Sudarshan TV was running a show “Bindas Bol” which has now been stayed for two days by a Supreme Court bench of Justices DY Chandrachud, KM Joseph and Indu Malhotra for “vilifying the Muslim community”.  The adjourned matter would be heard again on Thursday, September 17.

I was not in the court but I could imagine Justice Chandrachud, in his rather stern disposition, sounding a sage when he said thus: “We are of the opinion that we appoint a committee of five distinguished citizens who can come up with certain standards for the electronic media. We don’t want any politically divisive nature and we need members who are of commendable stature.”

It must have taken some time for listeners to draw the import of His Lordship’s statement. But trust Solicitor General Tushar Mehta to have recovered in time to quip: “Freedom of the journalist is supreme…it would be disastrous for any democracy to control press…there is also a parallel media other than electronic media where a laptop and a journalist can lead to lakhs of people viewing their content.”

So the two strands of opinion must be clear to readers by now: A bench of Supreme Court wants to control the freedom of the press, though they produced the nice wrap of “just electronic media” and a counterpoint which questioned who do the Lordships choose and who you don’t in your purview.

I run NewsBred, which is a digital platform, so naturally I won’t have to look over my shoulder if a newspaper or a journo or a politician or an academician bares his teeth at me and is cheer-led by thousands others who wish nothing good comes to me or my web magazine.

I could also sense the Lordships anger directed at Arnab Goswami of Republic TV who walks fearlessly on hitherto sanctified territory of Gandhis and Thackerays and Khans of our world.  I think the readers would derive the same import from the words of Justice KM Joseph, a fellow Lordship in arms with Justice Chandrachud, when he said so:

“Media can’t fall foul of standards prescribed by themselves. Next, in debates, one needs to see the role of the anchor; how one listens when others speak. Check in the TV debates the percentage of time taken by the anchor to speak. They mute the speaker and ask questions.”

Now I am not holding a court in defence of Arnab. I too feel he is often insufferable. He only lets you speak what he wants to hear. Or your voice is drowned in his hysteria. But as Our Lordships expanded their theme, and I went through their observations, my cheerful visage had turned to somewhat grim.

Justice Chandrachud chose the moment to offer his own solution: We are of the opinion that we appoint a committee of five distinguished citizens who can come up with certain standards for the electronic media. We don’t want any politically divisive nature and we need members who are of commendable stature.”

Now it rang a bell in my head. Could our Lordships be thinking of Ramachandra Guha, Harsh Mander, Romila Thapar, Teesta Setalvad as the “distinguished” voices? Who decides who is “distinguished”? I mean I find my gardener Manoj pretty distinguished in his conduct. We all have had helpers in our lives who we remember as “distinguished” for their compassion, honesty and dignity. And don’t we have Press Council of India, a regulated body part of India’s Constitution?

It appears Justice Chandrachud had come prepared for such queries. He replied to one on Press Council of India: “Really? If things would have been so hunky dory then (one) would not have to see what we see on TV today.”

So out goes Press Council of India. Out go we ordinary folks too who would’ve loved to question Our Lordships what we fools are doing by electing our representatives and sending them to Parliament to define and expand our freedom, choices and dignity? Why do we need elections if our Lordships could decide on behalf of our executives and legislatures? Why not roll up the entire stuff and let our distinguished Lordships run the country?

I wonder how the quest of our Lordships for “transparency” holds ground when the selection of Judges themselves is “opaque”, decided by them and them only. A National Judicial Appointments Commission (NJAC) had been proposed by the Modi government for the appointment and transfer of judges. The Constitution of India was amended for the same. It would have replaced the collegium system as run by the judges themselves. But the Constitutional bench of Supreme Court struck it down in 2015.

In passing, let me inform the readers that in the United States, the Supreme Court judges are nominated by the President who is an elected representative of the people. In turn the senate, again elected by the people, ratifies it.

So where is the will of the people in this “solution” suggested by our Lordships? Why have the President and the Prime Minister or Information and Broadcasting Ministry? What happens to those lowly unwashed masses of cow-belt who are responsible for making the government but could throw up a stink in the nostrils of our Lordships?

I don’t think the Constitution allows Supreme Court to appoint such committees of “distinguished” persons. It only sounds worse when attention is paid to Justice KM Joseph’s uttering: “We need to look at the ownership of the visual media. Entire shareholding patterns of the country must be on the site for the public. The revenue model of that company should also be put up to check if the government is putting more ads in one and less in another.”

So even as I take comfort that men of opinion like me, and our digital passions, are spared the rod, the words of Justice Chandrachud makes me queasy. Over to him: “We are not on Social Media today. We cannot choose not to regulate one thing because we cannot regulate all…(Social Media) cannot be compared to profit-making entities. An intellectual blog or academic interest is very different than such organizations.”

So My Lordship, if I could ask, what career prospect does he propose to my two interns, Bhumika and Deepika, who get salary in thousands but have horizons of lakhs for future? Who would recommend a career in journalism to youth if they can’t make a living? Only big media makes journalism survive and flourish in this country. Ask a solution from your five “distinguished” persons of stature before you carry out your fanciful idea in full.