Outrage on India and silence on US: Now who says media is not compromised? 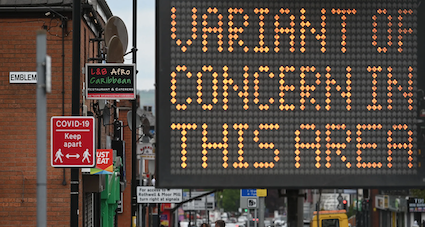 When India was ravaged by the second wave of Covid-19 pandemic in April-May this year, the Indian and western media forgot the basic rule of journalism that it is to be sensitive to the victims and those who are grieving. Journalists Barkha Dutt, deceased Danish Siddiqui were seen reporting from crematoriums, ICU with little concern for how their intrusion could affect life-or-death decisions. Media outlets The New York Times, The Washington Post, and news agencies such as Reuters were filled with images of dead bodies burning pyres and other graphic scenes.

Both international and domestic left-leaning media, amid this devastating virus, were busy looking for an opportunity to manipulate facts and show the Modi government in poor light.

However, now when the US is battling a serious outbreak of Covid-19 again, the Western media is avoiding harrowing images from those settings.

In the last 24 hours alone, the United States of America has recorded over 1,50,000 fresh cases of Covid-19, and at least 1,100 deaths. A local news channel in the city of Tampa reported such a backlog at a local funeral home that bodies have been “stacked to the ceiling”.

The fresh infections have risen in 42 of the 50 US states, while deaths are now increasing in 43 states, the worst tally since December.The United States is running out of ICU beds and oxygen. Florida may be out of oxygen in 24 hours—it recorded its highest daily deaths.

The US has seen its Covid numbers shoot up with the emergence of pandemic’s Delta variant. Hospitals in Florida, Mississippi, Georgia, North Carolina, South Carolina, and West Virginia are all reaching dangerously low amounts of oxygen, with the worst-hit left only 12 to 24 hours of supply. They are using three to four times as much oxygen as they were before the outbreak because more than 17,000 patients are hospitalized statewide in Florida with Covid-19.

According to the Florida Hospital Association, the hospitals in Florida currently have 16,163 Covid-19 patients, taking up 33% of intensive care unit beds as of August 26.

But we won’t see the mainstream media covering it because for them unvarnished coverage of suffering, grief, desperation, and ineptitude only comes from India.

By directing their cameras to the burning pyres, Western media outlets were satisfying their audience’s morbid fascination with the Hindu tradition of cremating the dead, and Indian “left-liberal” journalists were fuelling those images by polarising opinions. They strived hard to bring a bad name to the country.

But it seems like only negative stories about India make it to The New York Times and Guardian because there is no mention of how a country that claims to be a “super-power” has utterly failed in tackling the Covid pandemic while India has successfully overcome it.

Don’t forget the Left-Liberals in this another pathetic episode in journalism.

Barkha Dutt whose irresponsible journalism dated back to the Kargil war when she was seen covering a military operation that was supposed to be carried out in complete secrecy, is seen holding primetime shows, not on how the Biden administration has failed to handle Covid-19 but to talk about American withdrawal from Afghanistan.

Same accounts for several other Left-Liberals whose names bear no repetition and whom you could find in dozens in media outlets such as the Indian Express, NDTV, ThePrint, TheWire, TheScroll, NewsLaundry etc.