Pakistan rules out war with India on Kashmir 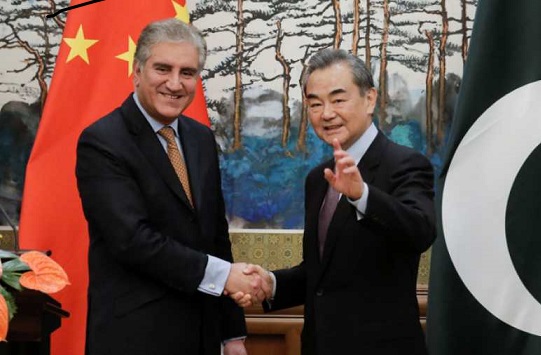 Pakistan has ruled out war with India on the Kashmir issue but it is not to say that it would sit on its back on the matter. It has secured a pledge from China, an all-weather friend, to haul India  to the United Nations Security Council on its act of abrogating Article 370 and 35A and turning the state of Jammu and Kashmir into a Union Territory (UT).

Pakistan’s foreign minister Shah Mahmood Qureshi held talks with Chinese state councilor and foreign minister Wang Yi in Beijing yesterday and apparently a neutral stance by the Chinese on the matter has now tilted in favour of Pakistan.

Qureshi’s desperate rush to Beijing for their decades-long policy has borne fruits as he called upon China’s support in this hour of crisis.

As per Chinese news agency Xinhua report, Wang has cited the UN Charter which upholds international peace and security, fundamental human rights, adherence to international law and obligations of member states to adhere to treaties etc), relevant resolutions of the UNSC on Kashmir (on the status of J & K, holding of plebiscite etc) and the bilateral agreements between Pakistan and India (Shimla Agreement and the Lahore Declaration) as the roadmap to take on India on Kashmir.

It is learnt that China would pledge support to Pakistan when the latter brings up the Kashmir issue on the UNSC table. Wang was reported to have said: “China and Pakistan are all-weather strategic partners and have always understood and supported each other on issues concerning core interests…China will continue to firmly support Paksitan in safeguarding its legitimate rights and upholds fairness for Pakistan in international affairs.”

Interestingly, Pakistan has ruled out any military action against India.  Instead, it hopes to ride on China support to bring about political, legal and diplomatic pressure on India. So Qureshi later told the media in Beijing: “Pakistan is not looking at the military option. We are rather looking at political, diplomatic and legal options to deal with the prevailing situation.”

Radio Pakistan meanwhile has reported that the meeting between the two foreign ministers lasted for two and a half hours. It said Wang has agreed that “steps taken by India are unilateral that have changed the status quo and structure” of J and K and “could jeopardize the peace and stability of the region.” Radio Pakistan further said that Wang “was in concurrence that Jammu and Kashmir has been recognized as a disputed region and its resolution should also be in the light of UN resolutions.”

The firming of a joint stand by Pakistan and China has been encouraged by the ambivalence of United States on the matter. Next week two senior US officials are arriving in Delhi: US deputy secretary of state John Sullivan and Acting deputy secretary of state in charge of South Asia Alice Wells. Sullivan is reaching Delhi from Bhutan while Wells would be visiting Islamabad and then dropping in in the Indian Capital.