Peanuts, and not wazwan, is all Gupkaris would get in today’s meet 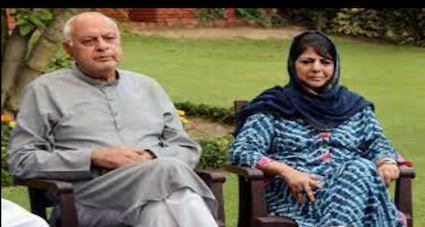 It has been amusing (for want of a better and more accurate expression) over the last few days to see hyped up reactions to the all-party meeting (APM) called by Prime Minister Narendra Modi today afternoon. There are animated discussions going on in hundreds of WhatsApp groups about what was about to happen. It all appears speculative, based on fertile imaginations with wild comments being made. There were some who went to the extent of saying that the meeting could lead to restoration of Article 35-A and 370.

(Incidentally, wazwan is a very elaborate meal served in Kashmir during weddings, as also some festivities in the family. A dozen non vegetarian dishes, or more, can be there during wazwan servings which are orchestrated by wazas, the specialist cooks, hired for these occasions.)

Well, it appears clearly nothing like this is about to happen and at best it will only be a meeting aimed at thawing of relations. For producing a thaw in the relations between the BJP and leaders of People’s Alliance of Gupkar Declaration (PAGD). Nothing more, nothing less to change the ground situation is about to happen. Many of PAGD leaders remained incarcerated for long periods after August 5, 2019, decisions which consigned the Jammu and Kashmir Constitution to the dustbin of history.

Now, let us, for the sake of convenience, call leaders of the PAGD alliance, be it Farooq Abdullah, Mehbooba Mufti, Yusuf Tarigami, or others, Gupkaris collectively. What is it that they want? Or let us say what is their publically stated posture or stance on different issues. Oh, they want pre-August 2019 status of J&K restored. That means restoration of 35-A, 370 in its earlier avatar, reversal of Union Territory (UT) status of J&K, as also Ladakh, and some such allied demands.

What are the chances of these things happening?

Is Article 35-A going to be restored? No.

Is Article 370 going to be restored, just as it was earlier? No.

Is UT status of Ladakh about to be snatched away? So that Ladakh is a part of J&K again. No way.

Is Centre about to roll back all the progressive laws it has implemented after scrapping J&K Constitution? Not at all.

The most important item on Central government’s agenda pertaining to J&K right now is a fresh delimitation. Of both legislative assembly constituencies and the Lok Sabha segments. That process is already on and has picked up pace now under retired Supreme Court judge Ranjana Prakash Desai. The number of assembly segments in J&K earlier was 83, with 46 segments in Kashmir and 37 in the Jammu region. With seven seats added, the number now would be 90 and for the first time Schedule Tribes (STs) will also get reservations as mandated by the Indian Constitution.

There will be a rotation of all seven constituencies reserved for Scheduled Castes (SCs). Reservation of eight or nine seats for STs means the number of seats for general category will reduce in the assembly. One is not very clear about the shape of things regarding Lok Sabha segments but one is sure that all five segments will see realignment of boundaries. All five will have new boundaries with all the three Lok Sabha segments in Kashmir set to become bigger, and Udhampur and Jammu set to lose some areas.

In Dogri, there is an expression called chhankanay which is used to describe a situation in which one party gets nothing. Kay milya? Chhanknay is often the answer, every bit in a mocking (and often pejorative) tone. This is about what is all set to happen to Gupkaris, it seems.

(This is the third piece in a series on ’71 Indo-Pak War which is celebrating its 50th year this year. The first and second...