PM gave us a hearing, grateful: Nitish on caste census 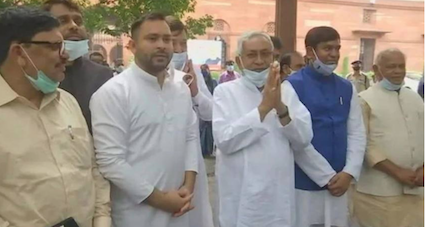 After meeting Narendra Modi, Bihar chief minister Nitish Kumar said  the prime minister listened to all delegation members on the matter of caste census in the state. Now he has to decide on the issue of the caste-based census.

“People in Bihar and the entire country are of the same opinion on this issue. We are grateful to the PM for listening to us. Now, he has to take a decision on it.”

Kumar was leading the delegation of 11 parties from Bihar in support of the nationwide caste-based census.

“We urged the PM to take an appropriate decision on it. We briefed him on how resolutions have been passed twice in the state Assembly on caste census,” he added.

Speaking strongly in its support, Tejashwi Yadav said it will be a “historic” measure in helping the poor. “Our delegation met the PM Modi today not only for caste census in the state (Bihar) but in the entire country,” Yadav said.

When reporters asked Tejashwi whether the PM Modi would turn down their call, CM Nitish Kumar intervened and said, “It is too early to come to a conclusion. Let’s wait for the decision of the Prime Minister.”

The issue of a caste-based census has been a longstanding demand of the political parties. Earlier, NCP chief Sharad Pawar and ex Uttar Pradesh chief minister Akhilesh Yadav had also demanded caste-based census.