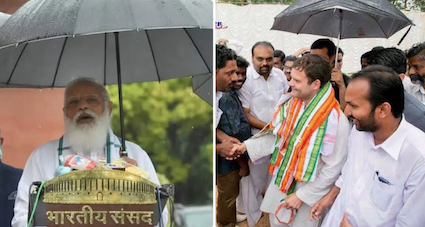 The first day of Monsoon Session began in Delhi today with lawmakers  Lawmakers reaching the Parliament amidst a downpour. However, it was one video of Prime Minister Narendra Modi that became the talk of the town.

In the video, PM Modi was seen carrying his own umbrella while Rahul Gandhi got an assistant holding the umbrella and escorting him to the building.

Many social media users also shared images from the past when staff personnel of Sonia Gandhi, Priyanka Gandhi held umbrellas for them.

The netizens quickly shared their reaction on Twitter, leading to instant debate between naamdar and kaamdar. While the simplicity of PM Modi won everyone’s heart, Rahul’s VIP treatment was questioned by many. Many called out the feudal & dynastic culture of Congress while dubbed PM’s conduct as refreshing.

This photo should teach, who think if they are paying someone, can ask him to do whatever they want, (files, tablet, chai, etc.). Everyone is doing their job & burdening them with baggage is just WRONG! Feels SO GOOD to see the same principles in my PM!ðŸ™ðŸ» #PMModi pic.twitter.com/sFYARjI0cm

Sharing the picture, Bharatiya Janata Party Aurangabad unit wrote on Twitter, “On a rainy morning PM @narendramodi comes to parliament.. Significant to see he’s holding his own umbrella throughout..”

BJP national secretary Sunil Deodhar also pointed out how humble PM Modi is to hold his own umbrella while Congress leaders, including former Prime Minister Manmohan Singh and former party president Rahul Gandhi had assistant with them for this work.

PM Modi on multiple occasions had said that he was just like ordinary people and was not born with a golden spoon and did not enjoy special privileges as Rahul Gandhi and other dynasts in the country did which makes him unlike most elites.