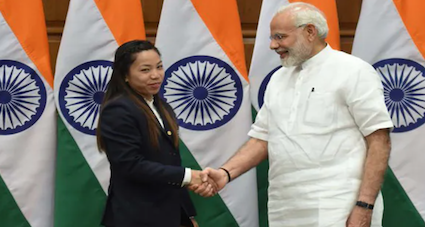 Earlier Chanu had revealed that PM Modi “helped” with a ticket for the US flight in one day to train there and undergo rehabilitation. “It’s true that Prime Minister Narendra Modi helped me reach the Tokyo 2020 Olympics after my injury. They booked the ticket for the flight in one day for the US to help me train there and undergo rehabilitation. Sir has given me huge support for the training,” added Chanu.

After this, the Manipur CM went to meet the Prime Minister this week where he thanked him for helping weightlifter Mirabai Chanu.

“I was surprised at her revelation about the help she had received from the Prime Minister. She disclosed that if she wasn’t given an opportunity to go to the US for her muscle operation and practice, she wouldn’t be able to achieve this goal. She narrated how PM Modi helped her directly. The Prime Minister helped the athlete and micromanaged the issue. People of Manipur were overjoyed to know how PM Modi helped her,” said Singh.

He mentioned, “Chanu was having back pain and this message went to PMO and PM Modi directly intervened and all expenditure on her treatment and training abroad was taken care of by the PM.”

Beyond that he said, he was informed that apart from Chanu, there’s one more athlete who was sent to US for medical care but he won’t give his name. He further added that being an Indian and under PM Modi we feel so proud.

He said while they were thanking him he was just smiling. “This is the greatness of the leader,” he remarked.

Manipur has given five players who represented India in Tokyo Olympics. Talking about the state infrastructure, Singh said, With a renewed thrust on sports, the state has also got National Sports University and the construction of its new campus is going on in full swing.

“PM Modi gave Manipur National Sports University because he saw the potential it has in sports. The university work is in progress. We are providing old buildings to the university for its students and professors as the new campus is under construction,” he added.