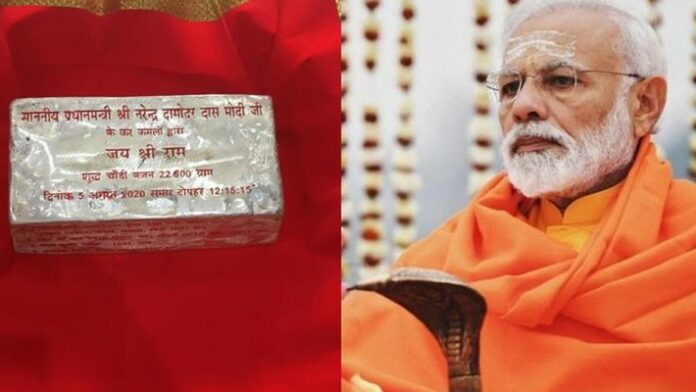 It would be a thrilling spell for prime minister Narendra Modi personally when he would place a silver brick at the foundation site of Ram Mandir, possibly the biggest moment of faith in the life of a billion living Hindus.

It is learnt many devotees, including businessmen and local residents, have contributed silver for the making of the massive brick.

This ceremony will bring an end to three-day of rituals performed by sages from Varanasi as per Vedic guidelines. Another silver brick would be placed at the sanctum sanctorum of the temple.

Accompanying the prime minister, will be former deputy prime minister and one of the founders of the Bharatiya Janata Party (BJP), LK Advni.

The prime minister would visit the site of Ram Janmabhoomi on August 5, the day when Bhoomi Poojan would be performed.

The event is organized by the Sri Ram Janmabhoomi Teerth Kshetra who have the mandate to plan and execute the construction of the temple for which Hindus have waited for centuries.

As per reports, social distancing would be maintained due to Coronavirus-induced situation and not more than 200 people would be present at the ceremony.

The trust has appealed to general public to watch the event on TV and light “diyas” in their homes on the day to mark the historic and spiritual event.