PM speaks in Bengali: Mamata says big deal, I can speak in Gujarati 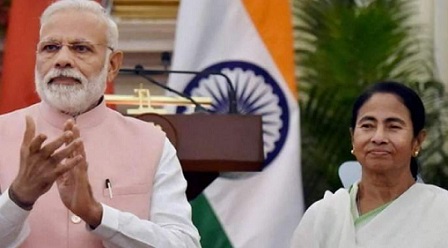 This is Mamata Banerjee’s playbook. When in doubt, blame Narendra Modi and this has happened time and again.

Prime Minister, during his Mann ki Baat radio address on Sunday, cited a Bengali verse to highlight the significance of his government’s Atmanirbhar Bharat and vocal-for-local campaign, recalling the revolutionary philosopher Aurobindo Ghosh’s views on Swadeshi. This seems to have upset Mamata Banerjee.

During her interaction with media at the state secretariat in Kolkata on Thursday, Mamata said she also knows a host of languages but does not feel the need to publicize or “show-off.”

A clip from the same interview is doing rounds on social media where she can be seen bragging about being conversant in a host of languages.

“I can speak Gujarati. I learnt Vietnamese when I visited Vietnam. I know a little bit of Russian after visiting the country three times. I also know Nagamese since I’ve worked in Nagaland for a long time. I know Manipuri, I know Assamese. I know Oriya, Punjabi, Maratha, and Bangla language. I know Hindi, Urdu, Gorkha, Nepali. But I don’t show-off”.

After the video went viral on twitter and other social media platforms, the users expressed reacted with a pinch of humour. While one of the twitterati proposed that the CM should start taking language tutorials at her office in Nabanna as she is so “well-versed” in several languages, others said her speech was more like an interview of a person seeking the job of a translator.

Mamata, further, also accused Modi of just reading notes and doing nothing else in his radio address.

“Everything appears in front of you on a teleprompter when you are giving a public speech. You just read it. The public won’t get to see it. Only a few people know this. Earlier it was a practice in the USA and the UK. Now we are seeing it in India,” she said.

It seems desperation on Mamata’s part just as the Bengal assembly election is less than six months away.