Private Railways: Tell a thing or two to Modi detractors 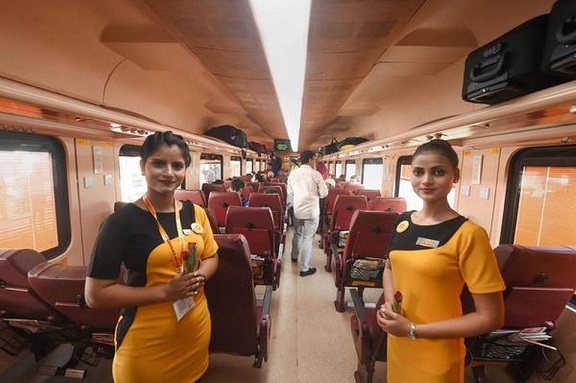 I am a little confused. My two ears have whispers which cancel each other out: One suggests that we are moving away from Liberalization; the other that we are giving India away to private hands. Whichever is stuck, would prove that the Modi government is driving its citizens like lemmings to suicide.

So, Indian Railways decides to give 109 of its meaty routes to private players. The chorus has gone up that it’s anti-poor. Higher fares by moneylords would keep the shiny toys beyond India’s miserables. How would they travel from Delhi to Mumbai to Kolkata to Chennai? Isn’t it driving them to unaffordable air-fares? What happened to the romance of “India moves on its trains”?

Only, the propagandists won’t share that India’s choked rail tracks are being majorly freed. No less than 70 per cent of India’s freight traffic would move to Dedicated Freight Corridors by 2022. East to West, North to South; around the Quadrilateral Corridor (Delhi, Mumbai, Chennai, Kolkata); two diagonals would take care of 55 per cent of Railways freight traffic over 10,122 kms.

Freer tracks mean more and not less passenger trains. More trains mean more confirmed reservations and not those visits to “puja rooms” so that Tatkals work. No less than 89 million wait-listed passengers couldn’t get confirmed seats in 2019! Railways would’ve more money to revamp its infrastructure which still is in its 1960s mode. How do you think the Freight Corridors are being managed? It is entailing an investment of $12 billion; with the World Bank and Japan International Cooperation Agency (JICA) pooling in around $4 billion.

Besides, look at India’s exploding transport needs. E-Commerce giants like Amazon and Flipkart are catering to tens of millions on roads or air. It would only grow, not lessen. Infrastructure won’t grow without efficient transport. Automobiles, after a Corona pandemic lull, is bouncing back with a revenge. Should we have miles of jams on highways or Railways, with its dedicated freight corridor, be welcomed? Could we ignore the trend that railway freight traffic has grown from 8 to 11% in last 2 years? The truth is India grows when Railways grow.

In just a few months, the premium Delhi-Lucknow Tejas Express is occupied 65% on an average, minus the Corona months. This despite it’s priced more than twice the fare of Shatabdi Express. It’s rarely late and tickets are available on short-notice. Those who could afford it, are aboard; those who can’t, would still have their “chuk-chuk railgadi.”

So how this “privatization” is “protectionism” and “anti-Liberalization”?

But hustlers don’t let go the bone between their teeth. Now the argument is that by blocking treacherous China on many economic fronts—including in Railways projects—India is turning its back on “free trade.” It’s taking the country a generation back to pre-1991 Liberalization era.  Be it infrastructure, electronics, telecoms, pharma, technology, investments, India is creating protective walls. It’s suicidal, we are told.

Now, don’t we know that no less than six airports—Amritsar, Bhubaneswar, Indore, Raipur, Tiruchirappalli, Varanasi–are being privatized? That public power distribution affair is being nudged into private hands? Does the move to auction coal blocks, after the coal mining section was opened to FDI in August 2019, remotely sound to you as turning your back to “Liberalization”? A return to protectionist times of Nehru-Gandhis?

So, for god’s sake, don’t twist “Atmanirbhar” (self-dependence) into a convoluted meaning. India wants to turn inwards but it doesn’t mean it’s cutting itself off from international markets. It wants the world’s money. It also wants to hold the spine of local producers. Does one could only happen at the cost of other?

So call out the detractors who only twist everything into an anti-Modi narrative. The welfare of India doesn’t matter to them. India is battling teething issues. Please don’t stab it in the back.