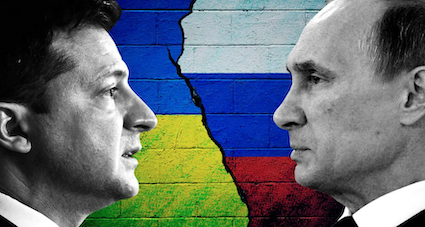 Russia’s president Vladimir Putin has put his country’s “nuclear deterrent forces” on alert even as Ukraine has agreed to hold talks with Russia on the Belarus border.

“I order the Defence Minister and the Chief of the General Staff of the Russian Armed Forces to put the deterrence forces of the Russian army into a special mode of combat service,” Russian President Vladimir Putin said, accusing the West of taking “unfriendly” steps against his country.

“You see that Western countries are not only unfriendly to our country in the economic sphere — I mean illegitimate sanctions,” he added, in a televised address.

Moscow has the world’s second-largest arsenal of nuclear weapons and a huge cache of ballistic missiles which form the backbone of the country’s deterrence forces.

Almost around the same time, Ukraine announced it was ready to hold talks with Russia at its border with Belarus – near the Chernobyl exclusion zone – after a phone call between President Volodymyr Zelensky and Belarusian leader Alexander Lukashenko.

Ukraine had earlier turned down Moscow’s offer of a meeting in Belarus, which has allowed Russian troops passage to attack Ukraine. Ukraine had proposed Warsaw, Bratislava, Budapest, Istanbul and Baku as possible alternative locations for any talks.

Ukraine took Russia to the International Court of Justice in The Hague on Day 4 of the invasion, as Russian forces continued to hit Ukrainian cities with artillery and cruise missiles.

Germany and its Western allies have agreed to cut Russia out of the SWIFT global payment system, a spokesperson for the German government said, in a third sanctions package aimed at halting the invasion. In a dramatic policy reversal, Germany on Saturday also ramped up its backing for Ukraine’s battle against Russia, approving weapons deliveries for Kyiv.