Rahul Gandhi and the ‘colonized mind’ 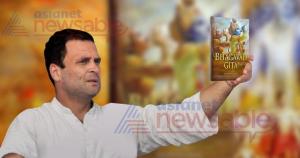 So we read this comic-tragic news the other day that Rahul Gandhi is reading Bhagwad Gita and Upanashids to counter Rashtriya Swayam Sangh (RSS) and Bharatiya Janata Party (BJP) in his political battle. (So, at least he has moved from the “RSS killed Gandhi” platform).

It’s comical for Bhagwad Gita and Upanishids are meant for self-advancement in the realm of spirituality. It’s not for debating points. It’s tragic because this bachelor wants to lead India’s destiny without the slightest idea of its heritage.

Rahul is free to follow the religion or philosophy of his liking. But it isn’t too smart for him to show his ignorance. It betrays how little initiation in country’s heritage he has had, both at his home or in the schools he went.

It’s an educated guess that Sonia Gandhi, and by inference her husband late Raajiv Gandhi, has had little appreciation of India’s sacred texts. Indira Gandhi probably carried the indifference of her father Pt. Jawaharlal Nehru who was scornful of India’s cultural traditions.

It’s fair to argue that a political leader shouldn’t align himself with any religion in a country of many faiths so as to appear unbiased. But Bhagwad Gita is about Dharma—and not religion. Dharma advocates the righteous way for an individual which the Western colonists cleverly implied it with religion. You were thus forced to be ambivalent about your own glorious past lest you appeared communal and non-secular.

This heinous ploy by the West did two things: One, it helped create a republic where in the name of “secularism” India was made to appear shameful if it owned up its magnificent past. Two, it helped to put one community against the other. A weak India is what the West has always wanted.

“The child is taken to school, and the first thing he learns is that his father is a fool, the second thing that his grandfather is a lunatic, the third thing that all his teachers are hypocrites, the fourth, that all the sacred books are lies! By the time he is sixteen, he is a mass of negation, lifeless and boneless.”

India suffered terribly at the hands of Muslims invaders and British colonizers. But there was a difference. Muslim rulers did coerce locals to take up Islam. However, they never tried to control Indians’ mind. British were more sinister.  From the start, they set about systematically denigrating India’s past, its achievements, its’ scriptures and customs. They introduced the fake Aryan Invasion Theory. And courtesy the Macaulay Doctrine, they set about wiping out the land’s own heritage with its monstrous education policy. Today, before knowing anything about India, the children recite “Humpty-Dumpty” in front of doting parents.  Higher education is no different. As celebrated Indologist Michel Danino writes :

“There is no mention of India’s seminal achievements: the decimal place-value system; that the so-called Gregory series, Pell’s equation or the fundamentals of combinatorics were anticipated by several centuries by Indian mathematicians of the Siddhantic period; or that Indian astronomers of the same era had developed powerful algorithms that enabled them to calculate planetary positions and the occurrences of eclipses with an excellent degree of precision.

“It is equally hard to accept that medical students should know nothing of Indian systems of medicine such as Aryuveda or Siddha, of proven efficacy for a wide range of disorders and even serious diseases.

“If the topic is psychology, the Western variety alone will be taken up, completely eclipsing the far deeper psychological system offered by yoga.

“Water harvesting is taught as if it were a new contribution from the West, even if it was widely practiced from Harappan times onward.

“One could go on (in the same manner) with metallurgy, chemistry, textiles, transport and a host of other technologies.”

It is no wonder that any attempt to revise school books is met with serious opposition today.  Indian languages are called “vernacular” whose root meaning is `belonging to native slave.’

A few years ago, State education ministers would have nothing to do with the merest suggestion of Indian culture into the curriculum. As Ananda Coomaraswamy, who opposed the prevalent education system vehemently in the 20th century, wrote:

“It’s hard to realize how completely the continuity of Indian life has been severed. A single generation of English education suffices to break the threads of tradition and to create a nondescript and superficial being deprive of all roots—a sort of intellectual pariah who does not belong to the East or the West, the past or the future…of all Indian problems the educational is the most difficult and most tragic.”

So it has come to pass that Rahul Gandhi could nonchalantly betray his lack of connection with Indian roots and isn’t shamed for his ignorance. Those who could shame him—the intelligentsia, media, academics—won’t do because they are themselves a mirror image. He is studying Bhagwad Gita and Upanishad to fight a political battle!!! This is what you say, a Paradise Lost.