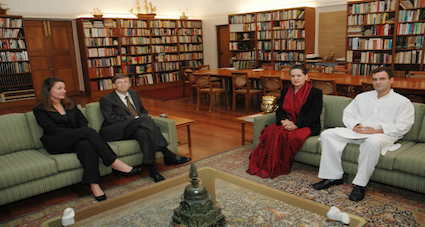 Throughout the pandemic, monopolist-turned-philanthropist Bill Gates and his multiple foundations were applauded for their “support,” in the production and distribution of Covid-19 vaccines. But the risks of relying on an elite philanthropist to make decisions crucial to health can turn out to be fatal.

A twitter thread has detailed some shocking allegations. Read on.

In 2009, several schools for tribal children in Khammam district in Telangana — then a part of undivided Andhra Pradesh — became sites for observation studies for a cervical cancer vaccine administered to around 16,000 girls, aged between nine to 15, in the district, many of whom stayed in the state government-run hostels.

The United States-based NGO, Program for Appropriate Technology in Health (PATH), conducted an allegedly unlawful clinical trial of a Human Papilloma Virus (HPV) vaccine, Gardasil by Merck and Cervarix by GlaxoSmithKline (GSK) on tribal children, without the consent of their parents.

It was later revealed that the NGO was funded by Bill and Melinda Gates Foundation (BMGF). Not only that, but BMGF also hold stocks of Merck and Co, one of the companies whose drugs were being tested, worth $205million.

While the study was cancelled in 2010 following the local media reports highlighting the death of seven girls, a parliamentary committee was formed to investigate this matter.

A Twitter user brings the report, “Alleged Irregularities in the Conduct of Studies using HPV Vaccines by PATH in India, 2013” by the parliamentary standing committee, highlighting how the Manmohan Singh-led Congress government was also responsible for failing to safeguard people who were taking part in clinical trials.

It is essential to highlight that the committee in its report explicitly mentioned that the PATH NGO and several Indian institutions, including the Drugs Controller General of India (DCGI) and the Indian Council of Medical Research (ICMR), failed to follow proper procedures, adequately monitor events or obtain informed consent from all participants.

However, despite it, then Union Health Minister Ghulam Nabi Azad continued to deny any links between the deaths and trial.

Additionally, the ICMR was headed by the same Dr Soumya Swaminathan, the chief scientist at the World Health Organization (WHO), who is accused of spreading false information related to using the Ivermectin drug during the pandemic.

Questioning the role of the ICMR, the committee pointed out that it failed to understand why the ICMR “took so much interest and initiative in this project when the safety, efficacy and introduction of vaccines in India are handled by the National Technical Advisory Group on Immunisation.”

The Department of Health Research/ICMR “have completely failed to perform their mandated role and responsibility as the apex body for medical research in the country. Rather, in their over-enthusiasm to act as a willing facilitator of the machinations of PATH, they have even transgressed into the domain of other agencies which deserves the strongest condemnation and strictest action against them,” the report mentioned.

While the committee revealed several shortcomings, the shoddy investigation by the state government and alleged ethical lapses in the vaccine trial conducted by PATH and ICMR, no strict action was taken by the Congress government.

The Twitter thread points out the valid reason behind it. It shows that the Congress’ ‘not-for-profit organisation’, Rajiv Gandhi Charitable Trust received funding of whopping Rs 70 crore between 2012-2017 from BMGF.

Interestingly, not only just Congress, its friendly NDTV media network also received a huge grant of 6 crores in 2011 from the Bill and Melinda Gates Foundation, says the twitter thread.

It should come as no surprise that after that, Bill Gates has given dozens of exclusive interviews only to NDTV. The media network has also published several articles advocating the use of HPV vaccines, as per the twitter thread.