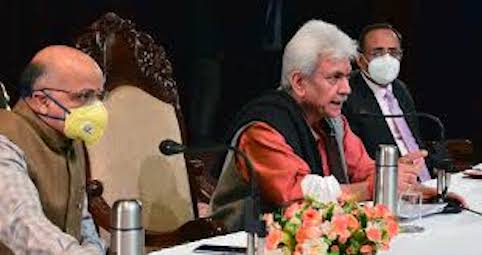 Lieutenant Governor Manoj Sinha has said that Pakistan’s threats to go to the World Bank or International Court of Justice (ICJ) did not deter the Central government. The Narendra Modi approved the 850 MW Ratle power project disregarding these underlining Pak threats.

“Jammu and Kashmir was deprived of this mega project for so long because the previous regimes were scared to move ahead due to Pakistan’s threats of going to international court for arbitration, and making representation in the World Bank,” Sinha said in Jammu on Wednesday.

“Let me announce here that the Union cabinet that met under the chairmanship of PM Modi granted sanction to the 850 MW Ratle power project worth Rs 5,822 Crore. The project will be commissioned in five years,” he added.

The go-ahead for Ratle power project, to be set up near Drabshalla in Kishtwar district has been approved in the face of opposition from our western neighbour. Pakistan has said that it will raise the issue of this power project at various international forums. This is consistent with past Pakistan record of raising objections to each and every hydropower project constructed, or planned, on any of the Western Rivers, by India.

On January 9, Newsbred had flagged the issue and warned that Pakistan could raise objections to power projects being planned in Jammu, Kashmir as also in Ladakh regions. This was around the time when the Centre had cleared several hydropower projects for J&K as also Ladakh. That Pakistan will continue to do so in future also is almost a foregone conclusion.

Sinha said the Ratle project alone will create 4,000 jobs directly and indirectly. For these jobs, the local youth of Jammu and Kashmir will get preference, he added.

Minister of State in PMO Dr Jitendra Singh tweeted about final clearances given by Prime Minister Narendra Modi’s cabinet to Ratle project on Wednesday. Incidentally, Kishtwar district falls under his Udhampur Lok Sabha constituency. The project could have been started as early as May 2013 when it was inaugurated by Manmohan Singh, Sonia Gandhi and Omar Abdullah. It was derailed later as the government did nothing to resolve various issues related to it.

India has all the legal rights under the Indus Waters Treaty (IWT) signed on September 19, 1960, to set up hydropower projects on Western Rivers. Despite that, time and again Pakistan raises the bogey of violation of this treaty. There is no upper limit for the number of projects that India can set up on these rivers as long as they confirm to being “run of river”.

In fact, the entire flow of the three Eastern Rivers of Sutlej, Beas and Ravi is for exclusive use of India. However, substantial flows have gone to Pakistan for over 60 years though that may change in the next decade, or lesser time frame. This will happen mainly because India plans to build dams on Rawi river and it’s tributary Ujh to impound them for use by Indian farmers. The projects on Rawi and Ujh are expected to cost more than Rs 15,000 crore.

The government at the Centre and the administration of Union Territory (UT) of J&K are both committed to ensuring unintended round the clock power supply to each household. “The project share will be 51 per cent by National Hydro Power Corporation (NHPC) and 49 per cent by J&K SPDC,” Sinha said.

Within the next five years, J&K administration will be investing around Rs 52,821 crores in power sector. “In next five years, at least 12,000 direct and indirect jobs will be created and first preference will be given to local youth of J&K,” he said.