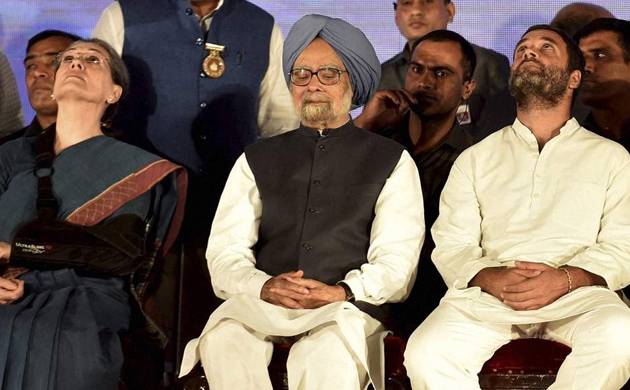 This is Congress’ season of apologies. Rahul Gandhi has apology forced out of his mouth by an unwavering Supreme Court and it may still not be enough. Sam Pitroda has spit out the dreaded word for Rahul Gandhi didn’t want to take any chance in Delhi and Punjab elections on Sunday, May 12.

Make no mistake though that apology doesn’t come any easy to Congress leaders. Indira Gandhi apologized for the Emergency by blaming others for its excesses! Addressing a public rally in Yavatmal, Maharashtra on January 24, 1978, Mrs Gandhi lamented those responsible for the mistakes and excesses were not willing to own up and thus she takes the “entire responsibility for the same.” However, her heart still lay in the necessity of the Emergency for she said: “It (Emergency) was a dose of medicine to cure the disease.” Wow!

Congress loyalists though still have difficulty in owning up and feeling sorry for the Emergency.  Salman Khurshid, a former External Affairs minister like his father (Khurshed Alam Khan) and maternal grandson of Zakir Hussain (ex-president of India) has still not been brought to account for his inflammatory words on the Emergency. In Hyderabad, on July 12, 2015, Khurshid remarked thus: “Why should we (Congress) apologise? Why should we discuss Emergency? Certain things happened (Hua to hua in Pitroda’s words)…if we have to apologize, then people of India will also have to apologize…why did they elect her (again)?”

It’s worth reminding readers that none of Congress stalwarts in the 1970s ever apologized for the Emergency. There are a few big names which instantly come to my mind: Bansi Lal, Sardar Swaran Singh, Kamlapati Tripathi, Uma Shankar Dikshit, Inder Kumar Gujral, Vidya Charan Shukla etc. Jagjivan Ram indeed supported the Emergency (his daughter Meira Kumar, who was opposition candidate against Ram Kovind for presidential elections in 2017, can still apologize on behalf of her father). Truth to tell, no Congress leader till recently ever did.

Then there are those Congress leaders who drum up weird logic to defend the indefensible. Anand Sharma has a bulldog’s boorishness yet the delusion of a suave debater. He once credited Indira Gandhi for “lifting the Emergency.” Imagine: A killer being hailed for making sure the victim’s eyes were spared. Yes, he is the same Anand Sharma who now defends Rajiv Gandhi and his family holiday on INS Viraat as what does Modi know about a family and a vacation? I mean could somebody tell the man of the spectacle he is making of himself in public.

But then Anand Sharma is only following his party’s tradition of creating absurd logic in order to avoid a simple word: Sorry.  Sam Pitroda says he is sorry because his Hindi is not very good. It’s the same logic Mani Shankar Aiyer said in defence of his “neech” remark against the Prime Minister Narendra Modi. And how do you think Sonia Gandhi has reacted to the mass killing of Sikhs on the streets of Capital in 1984?

The Congress matriarch’s mention of 1984 Sikh killings came in Chandigarh during one of her election rallies in 1998. Sonia Gandhi had then said she “could understand the pain of Sikhs as she herself has experienced it, losing her Rajiv and her mother-in-law Indira Gandhi that way.

“There is no use recalling what we have collectively lost. No words can balm that pain. Consolation from others always somehow sound hollow,” she had said.

Does it sound an apology to you? Does it sound an apology to Rahul Gandhi who thumped his chest in public on Friday saying her mother Sonia Gandhi had apologized for the 1984 Sikh killings.  This is what he thinks is an apology?  It seems not just the Hindi but even English of Congress leaders is bad. As far as I could understand Sonia Gandhi simply mentioned tit-for-tat. “I lost mine, you lost yours – so what (hua to hua, in other words).” Shouldn’t Rahul Gandhi apologize again attributing false apology to her mother?

Now listen to what “goonga” PM Manmohan Singh said as an apology to 1984 Sikh killings which Rahul Gandhi is trumpeting around. In 2005, a good 21 years later, Manmohan Singh’s conscience came out of coma and uttered that the killings of Sikhs was “shameful” but equally shameful was the “killing” of Indira Gandhi. Does it sound a sincere apology to you? To me it appears “whataboutery” of which the Left-Liberal-Sickular media is so fond of uttering.

The delicious irony is that it was virulent Sanjay Nirupam who once had to apologize. “Congress Darshan”, the party’s mouthpiece, once criticized Pt. Nehru for the present state of affairs in Kashmir and Tibet which could’ve been set aright if Sardar Patel had been put in charge. The mouthpiece also let out that Sonia Gandhi’s father was a fascist soldier.  Nirupam lost little time in putting his tail between his legs and expressed “apology” for the outrage.

While I am on the “Hall of Apologies,” I can’t resist bringing on Arvind  Kejriwal and his litany of shameless apologies. He once apologized not once, twice but three times to three different individuals for bringing disrepute to their names. One was Kapil Sibal’s son Amit, the second was SAD leader Bikram Singh Majithia and finally the mother of all apologies, to Union minister and BJP leader Nitin Gadkari.

This is the same Arvind Kejriwal and his party AAP which brought a resolution in the Delhi assembly for the return of “Bharat Ratna” award to Rajiv Gandhi for 1984 Sikh killings. And this is the same Congress which nearly tied up—and could still tie-up post 2019 elections—in Delhi.

In essence these charlatan politicians and their apologies are not worth a grain of salt. We suffer them day in and day out and unfortunately actually pay for it by buying the newspapers which serve as their propaganda boardroom bulletins.