Remember 5 who went missing in Ladakh? There is more to it than meets the eye 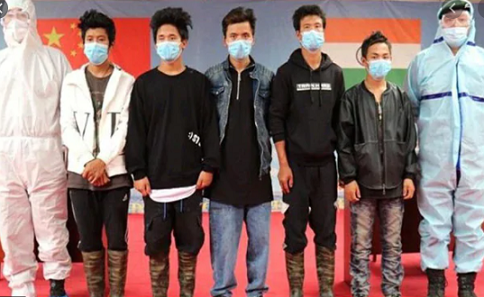 All of us remember five men from Arunachal Pradesh who went missing last month and were handed over by China after 10 days of detention.

Indian Army made it public that these five residents were on a hunting trip. The families of these men claimed that they were porters for the army. The Chinese couldn’t bother if they were porters or hunters. They made due diligence and thereafter sent them packing across the border.

It wasn’t a one-off incident. Indeed, three such incidents have happened in quick succession and on all occasions, they returned home after making headlines. All of it begs the question: what’s this hide-and-seek being played along the Line of Actual Control (LAC)?

Those in the know say that both Indian Army and People’s Liberation Army (PLA) keep an eye on such vagabonds but for different reasons. Indian Army is keen to halt the rampant smuggling carried out by these waywards while the PLA senses a quick buck they could make with the spoils such men carry.

The eastern region of Ladakh is a long boundary of over a thousand kilometres between the two Asian giants. Quite a few of its hilly territory is inaccessible and only locals, with knowledge passed on from generations, know their way around. And they have also learnt, over generations, how to make a massive profit out of the spoils of these desolate regions. That’s by smuggling stuff across the border or through multiple routes in Myanmar and Nepal.

The smuggling involves hunting two animals which are in great demand in China due to the properties they carry within them. One is musk deer which is “Kasturi” in common lingo. The adult male musk deer secretes musk which is a must in a few medicines of interest to China, including treating impotence. The other one is Asiatic beer, the bile of which is being used by the Chinese medical structure in treatment of critical Covid-19 cases. About 10 gram of the navel of the musk deer could fetch up to 500 US dollars to agents, spread across the state. The message board from the government is ubiquitous in cautioning villagers to abstain from hunting the musk deer. International Union for Conservation of Nature ((IUCN) has listed musk deer as an endangered species and the Asiatic beer as vulnerable.

Then there is Paris polyphylla, easy to obtain and quick to sell. It’s a vulnerable medicinal plant.  Paris polyphylla is most easily available among the four items which has been listed as a vulnerable medicinal plant by the IUCN. Locally, they call it “rinke” or “kola kochu.” It mainly grows in moist and shady areas of forests, thickets, bamboo forests and grassy or rocky slopes. As well as it does in water channel in rich humus soil.

Though it’s found almost in all districts of Arunachal Pradesh, it’s more so in Dibang Valley, Upper Subansiri, Upper Siang. A study has reported the existence of four varieties of this herb-plant which could fetch up to $80 dollars a kilogram.

Then there is the magical fungi, yarsagumba which is believed to treat cancer, asthma and cure impotence. It’s a caterpillar-fungus fusion. When a mushroom infects and embalms a ghost moth larva living in the soil, a wobbly fungus later sprouts from the dead caterpillar which is 2-6 centimetres above the soil.

It’s mostly found in Nepal, Tibet, Bhutan and India and grows between May-August in a calendar year. Its found in profusion in eastern districts of Tawang, east and west Kameng in the state. A kilogram of it could go for a staggering $10,000. It’s a multibillion-dollar industry, spanning the US, China and Singapore.