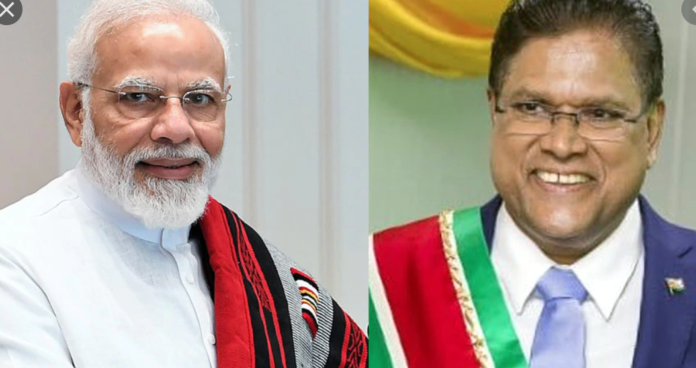 Chandrikapersad Santokhi, set to arrive as chief guest for Republic Day parade on January 26, has put the focus on Suriname, the smallest country in Latin America, also one world’s poorest as it were.

The president of the little nation, who took oath to office holding Vedas last year, is a replacement for UK prime minister Boris Johnson who pulled out of the event as a new Covid-19 strain in his country left him with little option.

His arrival on India soil is a tribute to Suriname’s importance to India’s historical, cultural and geopolitical sphere even though there is nothing substantial material which could result between the two nations in terms of trade.

But Surinam has 27% Indians, mostly Hindus, most of them educated, abounding as nurses, doctors and engineers. They have preserved their Indians roots in nearly a century and half, since they first arrived here in 1873, shipped by colonial British from India, as an indentured labours.

Almost 145 years ago over 34,000 Indian laborers took a leap of faith and traveled to an unknown island. The first sailing ship-Lalla Rookh reached Suriname in 1873 and it sailed last time in 1916. Between these 64 journeys, almost 34,000 Indians shifted to Suriname after the abolition of slavery to work on cocoa, cotton, and other things.

As India seeks greater engagement on the international stage, it is now looking the investing sufficient time and appreciating the potential of Latin America. Suriname is one such country-that have close if muted relations with India and, with the right policies, some innovation, and diplomatic initiative, India could use this as a springboard for greater involvement in the region, with the countries offering economic opportunities in their own right. Besides, Suriname stands with India in the United Nations on most matters.

The Indian Surinamese speak Bhojpuri, Awadhi, Maithili and Magahi. They have retained their cultural traditions, language and the richness of Indian folk music.

Suriname was under the dictatorial rule of Desi Bouterse but last year in July the country elected an Indian-origin, Chandrikapersad Santokhi as their new president. Santokhi, of humble beginnings, became the top cop of Suriname during his career before taking over the reins of VHP (Vooruitstrevende Hervormings Partij), a largely Hindu party.

Only last week, Santokhi was in India as chief guest of the Pravasi Bharatiya Divas convention, an initiative by the Ministry of External Affairs to engage and connect with the overseas Indians. He, along with Curacao prime minister Eugene Rhuggenaath and New Zealand minister Priyanca Radhakrishnan was among 30 NRIs who were conferred the Pravasi Bharatiya Samman award on Saturday.

Speaking at the convention, the Suriname leader gave a speech in Bhojpuri dialect, and said, “Suriname is prepared to take the first step in doing so by ending visa permits for visitors from India to Suriname.”

India has provided four Credit lines worth US$ 57 million to Suriname to set up water pumps, power transmission lines, 3 Chetak helicopters, Crash Fire Tenders, and coastal equipment. Three Chetak helicopters produced by HAL worth the US $ 13.5 million were handed over to the Ministry of Defence in March 2015. Exim Bank of India has provided a loan of US 8.4 million to the Ministry of Agriculture, Suriname for the rehabilitation of the pumping station of Wageningen, under the Buyers Credit program in August 2017.

The forthcoming visit of President Santokhi would only deepen the ties between the two countries.