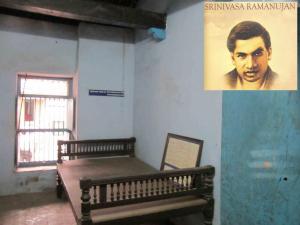 Watching the movie, “The Man Who Knew Infinity,” would tell you a great deal about mathematical genius Srinivasa Ramanujan but there’s a puzzle to his life which remains a riddle. Nobody has come close to solving it. Nobody would ever, either.

Ramanujan said it often that Goddess Namagiri Thayar came in his dreams and solved the theorems for him. He also saw the design of his goddess who, his superstitious mother claimed, told her in dream “not to stand between her son and the purpose of his life,” by refusing him permission to go to England.

It’s worth interjecting at this stage on Goddess Namagiri. Ramanujan’s mother was from Erode (Tamil Nadu) and Goddess Namagiri was a deity in Salem district nearby. An equation held no meaning for Ramanujan unless it held forth the God’s views.

His life is a testimony to a man without formal education matching his wits against the best of West, the world of rationality and logic, and leaving it in thrall with his often irrational and intuitive approach.

As his mentor GH Hardy was to say: “A poor and solitary Hindu putting his brains against the accumulated wisdom of Europe.”

“When a truly great one, like the Hindu Ramanujan arrives unexpectedly out of nowhere, even expert analysts hail him as a gift from heaven: his all but supernatural insight into apparently unrelated formulas reveal hidden trails leading from one territory into another…”

There sure was an invisible hand guiding his rather maniacal quest for theorems and formulas. He was born to a poor clerk, Srinvasa Ayyangar, in Kumbakonam, a temple town in Thanjavur district, some 300km south of Chennai, on December 22, 1887.

The signs of his genius were visible quite early. While in sixth form, he got hold of Carr’s synopsis of “Pure Mathematics.” It wasn’t a book of much great value but since then has been viewed as a seminal work for it stoked the imagination and hunger of Ramanujan’s mind. He began solving the most difficult formulas and equations without the help of other books or teachers. Some of the methods he chose were quite inventive.

In due course, he became so immersed in mathematics that he neglected other regular subjects and failed his junior F.A examination. It was a period of wilderness and distress. When 22, he married a nine-year-old girl Janaki Ammal in 1909, a “bright-eyed wisp of a girl,” after their horoscopes were matched. That forced him to look for a job which he duly secured as a clerk with the Madras Port Trust.

Then came that monumental moment in his life. Seshu Aiyar, a professor at presidency college, Madras, asked Ramanujan to write to celebrated mathematician GH Hardy, already a fellow of the Royal Society and a lecturer at Cambridge.

Ramanujan’s first letter to Hardy had about 120 theorems. This was 1913. It evoked no response. Ramanujan wrote again: “I am already a half-starving man. To preserve my brains, I want food and this is now my first consideration. Any sympathetic letter from you will be helpful to me here to get a scholarship either from the University or from government.”

This intrigued Hardy. He showed this letter to his colleagues in Cambridge. He asked University of Madras to consider Ramanujan for a scholarship.

It wasn’t an easy passage though. How could the University of Madras grant scholarship to one who didn’t have a bachelor’s degree? His numbers in maths were not spectacular either: 85 out of 150. The syndicate of university duly met on April 7, 1910, to discuss whether he could be enrolled as a researcher. Vice-chancellor P R Sundaram Iyer at this stage made a decisive say: “Did not the preamble of the act establishing the University specify that one of its functions was to promote research? And whatever the lapses of Ramanujan’s education, was he not a proven mathematical researcher?”

Ramanujan was now on board, at a princely scholarship of Rs 75 a month, along with permission to access the university library for his research reports. Much of his reports found its way to Hardy, his mentor. The invitation to cross over the seven seas came in fall.

He landed in England in early 1914. Thus became an association between Hardy, an avowed atheist and rationalist with Ramanujan, a devout and often irrational. It was to become one of the most famous associations in the history of mathematics.

Ramanujan reached Cambridge and was admitted into Trinity College. Prof Hardy, and Littlewood, became his teachers but often admitted that Ramanujan was an extraordinary piece of good fortune to themselves. “His profound and invincible originality…the flow of which showed no signs of abatrment.”

The most famous Hardy-Ramanujan number, the number 1729, came in 1918. In Hardy’s words: “I had ridden in a taxi-cab number 1729 and remarked that the number seemed to me rather a dull one.” Ramanujan replied: “No. It’s the smallest number expressible as the sum of two cubes in two different ways.” Fame soon overtook him and Ramanujan became both fellow at Trinity College and Royal Society. Ramanujan’s work flowed into the best of European mathematical journals and launched others’ works.

Within three years in England though, his health had begun to fail him. In May 1917, he was suspected to be suffering from tuberculosis. But he couldn’t leave for India due to ongoing World War. A newspaper report said that once Ramanujan attempted a suicide by jumping in front of a London underground train. The police didn’t arrest him after Hardy came to his rescue and testified that Fellows of Royal Society were not arrested in England for committing an offence.

Less than five years after he landed in England, Ramanujan returned to India on March 27, 1919. He died a year later on April 26, 1920. However, the work he did during this spell of illness was profound. The mathematics that Ramanujan developed after he became seriously ill held a high potential for applications in number theory and also in physics. Writhing in pain, he still worked till four days before his demise.

By the time he died, at a terribly young age of 32, Ramanujan had 3,900 theorems to his credit. He largely scribbled his formulae on scraps of paper.  They continue to be relevant at the frontiers of mathematics. His infinite series for Pi (symbol) was among his most applauded work.

His home in Kumbakonam has been converted into a museum, now called Srinvasa Ramanujan International Monument. There is still that wooden cot by the window through which Ramanujan looked out while he solved the world of numbers, all by himself, a slate and a piece of chalk. His home isn’t visited by many. Some who go to the temple nearby, seem to drift in at times.

In 2012, Dr Manmohan Singh dedicated his birthday, December 22, as the National mathematics day. An international journal is published in his name by Indian-American mathematician, Krishnaswami Alladi, at the University of Florida. It chronicles all the work in mathematics influenced by Ramanujan.

Ramanujan’s wife, Janaki, died decades later in 1994 in a flat in Triplicane, Chennai. The two were without a child.