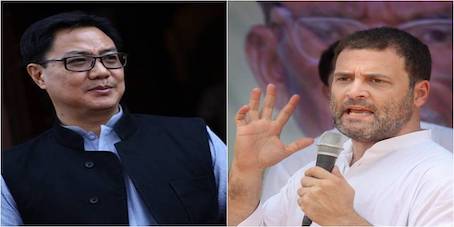 He was responding to Rahul’s claim that China was building a village in Arunachal Pradesh inside the Indian territory.

Sharing an article on Twitter, Rahul mocked Prime Minister Narendra Modi for claiming that he would “not let the country down”.

Attacking Rahul for being ignorant of sensitive facts, Rijuju said: “Those locations you are referring to have been under Chinese occupation since very very long Congress regime in India. How can a national leader be ignorant and unaware of sensitive facts?”

On Monday, some reports had surfaced which said that China had allegedly built a village on the banks of river Tsari Chu in Upper Subnasiri district of Arunachal Pradesh. The village reportedly consists of 101 homes and is located 4.5 kms inside the Indian territory.