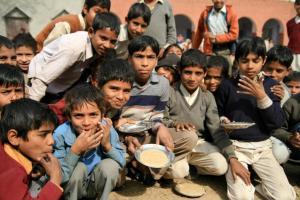 Worryingly, despite the rise in income, the average calorie intake of the Indians has declined by 10 per cent in the last 20 years.  Indeed, many sub-Saharan African countries poorer than India have par or better calorie intake. This has been the finding of Deepankar Basu of Political Economic Research Institute, Amherst.

However, Basu claims that the expenditure of households are normally divided into two types of essential elements—one we can call food and another we can call non-food essentials.

When one looks at the non-food essentials, they are usually expenditures on essential services such as healthcare, education, transportation etc which are required for daily life.

Now, because of various structural factors in the economy, the households have been forced to spend more and more on these essential services, and therefore the income growth that we see has been completely taken up by these non-food essentials. And therefore, the amount that is left to be spent on food has not increased.

“One big change from the early and mid-80s onwards has been a gradtual shift in the policy in India at the central and state level. More and more neoliberal policies have been adopted. One important element of such policies is that the public provisioning of essential services such as education, healthcare, public housing, transportation has been reduced.

Thus households have been forced to replace this expenditure that earlier the state used to provide by private expenditure. And that, we suggest, has taken up the income growth.”

In other words, there is a real and substantial welfare loss due to policies of the state and centre in the last 2-3 decades.

Lastly, a relatively non-controversial phenomenon that has a bearing on the decline in calorie intake is the diversification of diets. A slow but steady substitution of cheaper with more expensive sources of calories, e.g, rice and wheat with vegetables and fruits, in both rural and urban India has been noted by several scholars.  A substitution of more expensive calories for cheaper ones, given a constant food budget, is expected to reduce calorie intake.