Ruffians-on-Rafale: Time to shut them up 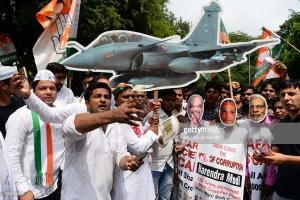 The Ruffians-on-Rafale would be on steroids till 2019 General Elections.

They would make sure you have cataracts in eyes through the newspapers and TV stations of their calling. Don’t be fooled by those grave columnists or spinsters with bob-cuts and garish lipsticks gesticulating on your TV screens. Most of them are on the payrolls.

These ruffians would repackage 5 Essential Lies on Rafale for the next eight months. Stuff them in social media with answers below. This plague then would’ve consumed no innocent. (For recall value, I suggest the format: “Shhhhh….link to this article”).

1.Rs 59,000 crores for 36 Rafale Jets is way overpriced than what UPA/Congress had negotiated with France

This is just not purchase of bare jets but includes Meteor missiles of extraordinary range, other weapons, training systems, performance-based logistical and enhanced maintenance support. The UPA/Congress contract envisaged in 2012 was only for production of bare aircrafts that would’ve called for many separate additional contracts, delayed by years and thousands of extra crores. (As an aside, why did UPA/Congress fancy only bare aircrafts? Was the scandal of Mirage-2000—jets first, weapons later—only a prototype?).

2. Why is NDA government afraid of a Joint Parliamentary Probe if the purchases are fair, as Ms Priyanka Chaturvedi, Congress spokesperson, wickedly strutted on Sunday.

The Opposition knows the government can’t make a public statement due to inter-governmental secrecy clauses. If the Opposition wants detail, it could ask the Parliament for a secret session as permitted by Clause 245-252 of Rules of Procedure and Conduct of Business in the Lok Sobha for all the financial and technical details. Or shut up.

3. The government has ignored  “ a 70-year public sector undertaking with a long, clean record and gave the contract to a 12-day old company…to favour a millionaire friend,” says Ms Chaturvedi

Ms. Chaturvedi ought to know that this “millionaire friend,” presumably Anil Ambani, has already filed a Rs 5,000 crore case against her bosses’ National Herald on the matter. But first thing first. This “70-year-old public sector undertaking,” presumably HAL, has been out on a limb on all previous licence productions. That’s because the concerned Original Equipment Manufacturers (OEMs) never take guarantee on aircraft manufactured by HAL. Dassault Aviation, OEM for Rafale, has refused to take responsibility for the work-share of HAL.  Further, HAL assessed manhours which were nearly three times than taken by the OEM.

As for Anil Ambani’s Reliance ADAG, the OEM (M/s Dassault and partners) could choose any offset partner in India from a list of 100 which includes Reliance. However, the deal between them is of a different kind. Reliance ADAG has a 49 per cent stake in DRAL, the joint venture formed with Dassault. This JV is for aero structures for Dassault’s Falcon 2000 civil aircrafts, completely unrelated to the Rafale deal.

4. Why buy only 36 aircrafts when 126 fighter jets were required?

UPA/Congress never signed the deal in 2012. The Indian Air Force projected an urgent need for 36 aircrafts in 2014. The Modi government anyway is set to grant approval for acquisition of 114 new fighter jets for over $20 billion later this month.

5. The government has sacrificed the interest of the country (presumably by buying lesser aircrafts at a higher price)

It’s a bit rich coming from Congress. The acquisitions of Jaguar, Mirage-2000, SU-30 MKI in the past bordered on scandals. Despite the criticism, they continued to be bought. 21 Westland WG-30 deal of 1985, bought for Pawan Hans and VVIP travel, had to be junked after accidents. The 1987 Jaguar deal was censored by PAC for the money spent (Rs 1500 crores) had gone down the drain as the planes were outdated. (No one is now flying Jaguar in 2018 but for the IAF). So indifferent have been past governments that in the 90s, India was compelled to procure 20-30 ground MiG-21s from East European countries. This second-hand purchase had to be done to keep the Air Force working.

It’s not NDA but the insensitivity of Congress which is compromising the safety of country. As former chief of Air Staff S. Krishnaswamy–to whom this piece owes a lot of its facts, states: “Thanks are due to those who pushed the decisions against the odds..arguments devoid of merits have an adverse impact…the morale of our military takes a beating. We as a nation must debate while staying with decency and facts. Accountability to the nation must be driven home, on which no one should be spared.’

So be ready with your “Shhh… (link to this article)” on social media over the next eight months. And hundreds of them. All of you.