Russia blows up a gas pipeline in Kharkiv, Ukraine 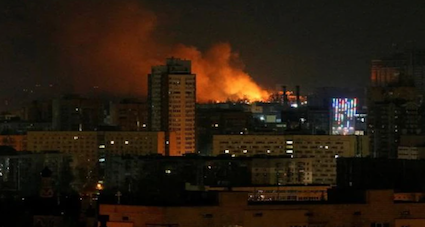 Russian forces have blown up a gas pipeline in Kharkiv, the second biggest Ukrainian city, on Sunday.

At least 1.5 million residents in the city have been advised to cover their windows with damp clothes and gauze to avoid direct contact with the toxic gas that filled the area.

Kharkiv is located 40 kms away from the Russian border.

As Russia engaged in its night-time offensive against Ukraine for the fourth day in a row, two explosions were heard in Kyiv on Sunday morning. Two blasts hit the southwestern part of the Ukrainian capital, including the one in Vasylkiv.

Meanwhile, in a bid to curb the Russian onslaught, the Western powers, including European Union, France, Canada and more have agreed to US President Joe Biden’s informal proposal of imposing SWIFT sanction on Russia to ensure “strategic failure for Putin.” In condemnation, social media platforms have also refused to advertise and monetize Russian content.