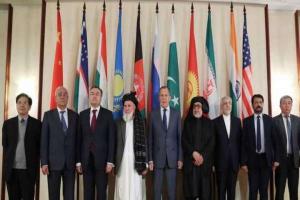 Russia secured a huge diplomatic victory when it got Taliban to turn up at a meeting on Afghanistan, attended by no less than a dozen countries, in Moscow last Friday.

This was the first time Taliban were face to face with the other side, the government-appointed Afghanistan High Peace Council, in the “Moscow Format” multilateral meeting which lasted less than three hours and was only aimed at kick-starting peace talks.

This was an acknowledgment that Taliban are stronger now than at anytime since 2001 when they faced the wrath of United States who took out the revenge on them for hosting Al Qaeda, the group blamed for 9/11 attacks.

Taliban, who were in power in Afghanistan between 1996-2001, have clawed back to the extent that they now control almost half of Afghanistan and deadly attacks on the Kabul government in recent times—whom they consider to be a US puppet—are at an unprecedented level now.

The Taliban and US have met twice in July and October this year in order to break through the impasse. In the “Moscow Format” meeting, US turned up as an observer after skipping its first edition last year.

No less than 28,529 Afghan soldiers have been killed since 2015 alone and Taliban’s growing might have forced United States to hold meetings with them in Qatar this year.

Despite over a decade of presence in Afghanistan, United States has achieved little and citizens, caught in the crossfire between Afghan government and Taliban, with US raining bombs and missiles from the sky, have nowhere to go, resigning themselves and their next generation to death any moment.

It’s a horrific situation and a threat to world stability, as Russia perceives Afghanistan could turn out to be a breeding ground for Islamic State (IS) terrorists, planted at the behest of United States, which could wreak havoc in Central Asia and threaten its own backyard.

Russia, historically a foe of Taliban, has tactically succeeded brilliantly in having countries as diverse as Pakistan to India to China to attend the “Moscow Format” meeting.

The Chinese delegate found the Taliban’s demand for withdrawal of troops as reasonable. The Pakistani delegation, seated next to Taliban officials whom they promote openly, stressed the road to peace was a long one. India had sent two non-officials who only observed and didn’t make any statements.

India has close ties with the Afghan government while Pakistan, as said, doesn’t hold itself back in promoting Taliban.

Iran and Russia declared the need for American troops to leave Afghanistan.

Afghan and Taliban delegations were amiable during lunch and tea breaks and acknowledged each other at the table.

Taliban’s resurgence of recent years is a new phase of Afghanistan conundrum. On one hand, it highlights the failure of United States on all fronts—diplomatic, political and militarily, not to speak of turning the country into a heroin/opium/drug supplying outpost to the world which, according to estimates, is now the third biggest of all trades, barring oil and gas, albeit an illegal one.