Sagarika Ghose, which history books are you reading? 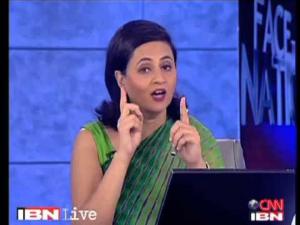 An open letter to Sagarika Ghose

I read your edit in Times of India today (April 26, 2017). You must remember me for I used to sit next desk to you in Times of India in the 90s. You might as well be remembering K.Dutta, then sport head, who I remember for one particular evocation:  “Its better we laugh amongst ourselves and correct our copy than be a laughing stock to the world.”

Those at desk who ignore this wisdom and clear your copy without cuts aren’t your friends. At best they are fools or at worst, fellow conspirators. They let hacks like you write on subjects about which you knew nothing; and know nothing. If there was a sensible hand on desk, you could’ve been saved this public shame. I also see this is rehash of an article you wrote four years ago.

First, you start the piece as addressed to Liberal Hindus. I know there is another Hindu on your mind—the Internet Hindu which is a straight lift of the euphemism which presstitutes of the West reserve for Rajiv Malhotra. Don’t tell me that you haven’t heard of Rajiv or that Internet Hindu is your original.

You call upon these liberal Hindus (of your imagination!) to take on the “strident voices” who call for a “holy war” against other religions. Let me tell you no Hindu, yes No Hindu, liberal or illebral, want a “holy war” against other religions. If it was so, you would have heard the war-cry to change the name of “Allahabad” which continues to be one of the most pious holy places for Hindus. Or question the logic of “Lodhi Colony” or “Aurangzeb Road” given the “war” they carried out against Hindus and their temples. Why, even original “Kashi Viswanath Temple” in Varanasi was converted into a mosque and continues to be one to this day.

Hindus don’t want Hindu first. They want India first. But this simple narrative escapes you, either out of ignorance or plain mischief.

You further state that Hinduism has been an amiable religion from time immemorial. WRONG. Hindus were a splendidly martial people. Wish you had read any of the accounts of Greek writers who accompanied Alexander in his invasion of India and declared that very few in the world could match the courage or fortitude of Hindu warriors. Hindus didn’t turn amiable—only their spirit was crushed under the terrible yoke of British. It would be the fate of any people who are under foreign domination. Why even England suffered the same fate after Romans left them after four centuries of domination. England was poked, raided, looted by all and sundry in Rome’s aftermath.

You then mention Akhlaq, Pehlu Khan, attacks on movie directors, meat-eaters, rationalists as a mark of “strident Hindus” which must be kept in check by liberal Hindus. May be this is your concept of “war” which is mentioned in an earlier para. By this definition, any issue of law and order must be placed at the doorstep of “Strident Hindus.” If I may ask you, why Muzaffarnagar riots don’t form a part of your description? Is it because the then government was headed by Akhilesh Yadav, a non-BJP government?

Why this concept of war doesn’t include merciless hacking of BJP workers in Bengal and Kerala? Why is that calling Maa Durga as prostitute by Left-Liberals doesn’t upset you? Why not a word when the Azaadi brigade keeps silence on soldiers or CRPF men being martyred? Why no reflection on Kashmiri Pandit exodus?  But Akhlaq and Pehlu are Muslims and serve your purpose on communal lines. It’s no different than the British Raj who divided India on communal lines. I can see such protagonists are still working overtime to break-up India.

You take your nonsense further by writing that Hindus never sought political power. Which history or religious books you have been reading Ma’am? Hindus have always believed that “shastra” and “shaastra” go together. That’s why you see our gods, Ram, Krishna etc with a weapon in their hands. ALWAYS. It’s not “Krishna, Ganpati are playful” as you mention.  “Shaastra” can’t be defended without “Shastra.” Real Hindus know that. It’s been an old ploy to keep Hindu placid and non-violent, that “Amaan ki Aaasha” nonsense, which Britishers made good use of—by also promoting Mahatama’s Ahimsa—that served to keep their subjects docile. Please don’t try this trick on us. Not Again.

You say that Hinduism survived because of its “inwardness” despite enjoying no political patronage. Again which history books have you been reading.? All these splendid temples came up without any political patronage? The trouble is you have been reading books which treat North India’s history as the real Indian history.  They had a motive in ignoring Pandyan, Chola, Chera, Satavahana, Pallava, Kadambas, Gangas and Chalukyas history.  You are a spokesperson of the same divisive brand. It won’t work. No longer, Ma’am.

There are other inane references—such as “Azaan” issue,  social medi trolls—which turn your piece nothing better than a rambling. The “Azaan” issue was not just about one religion. Sonu Nigam had called for a similar restraint on all religious noises. Social media trolls, well but for them, presstitutes would still be up to their tricks. Now they are being questioned and their lies are being made public. Indeed, they are the copy-editors you must submit your copy henceforth.