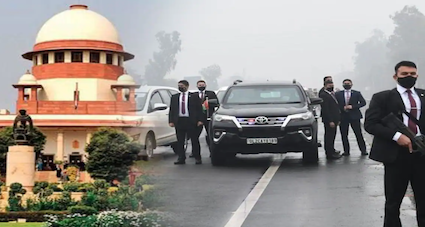 A high-level committee headed by a retired Supreme Court judge will investigate the breach in Prime Minister Narendra Modi’s security in Punjab that has snowballed into a major political issue in the run-up to the state polls.

The Supreme Court today asked the BJP-ruled centre and the Congress government in Punjab to hold the ongoing probes they had ordered. The bench of Chief Justice of India N V Ramana and Justices Surya Kant and Hima Kohli added that detailed orders regarding the new panel will be issued soon.

The court said DGP Chandigarh, IG NIA, Registrar General and Additional DG, Intelligence Bureau may be on the panel.

Blaming the Punjab government for the lapse, Solicitor General Tushar Mehta today told the court that there was “complete intelligence failure” and that there has been a “clear violation of the SPG Act”. He said the state government had provided no information to the PM’s security detail that there were protesters on the route.

The central government, he said, had to form a probe panel as the state government is “defending” police officers responsible for the lapse.

Punjab government’s counsel D S Patwalia said the showcause notice to the Punjab chief secretary “premediates and assumes everything against us”. “Twenty four hours given for reply, I don’t expect a fair hearing at all. There needs to be an independent probe,” he told the court.

Chief Justice Ramana asked the centre that if it wants to take action against state officers, “what remains for this court to do?”. “Please don’t be under the impression that we are not taking this seriously. This is about the PM’s security,” the Chief Justice stressed.

Rapping the centre, Justice Surya Kant asked, “Who held the officials guilty? Who has heard them? You cannot be against a fair hearing.” Justice Kohli said it is “not expected” of the Centre to ask the officials to reply within 24 hours.

A massive row broke out after the Prime Minister’s convoy had to be stopped for about 20 minutes on a flyover in Punjab’s Bathinda as the road was blocked by protesting farmers.

Blaming the Charanjit Singh Channi government, Union minister and BJP leader Smriti Irani accused the Congress of a “a murderous conspiracy to kill the PM”.

The Congress hit back, saying the Prime Minister’s travel plans were tweaked at the last moment. The party also accused the BJP of raking up the security lapse to cover up the embarrassment of thin crowds at a rally to be addressed by the Prime Minister.