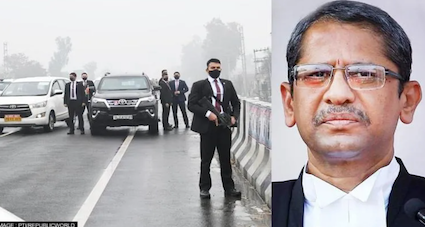 The Supreme Court will hear tomorrow a plea that seeks a court-monitored probe into the Prime Minister’s security breach when he was visiting Punjab on Wednesday.

A bench, headed by Chief Justice of India NV Ramana would hear the case on Friday. The petition has been filed by senior advocate Maninder Singh. He has been asked to give a copy of the petition to the Punjab government.

The petition has asked for a probe in the matter considering the political situation in Punjab.

Meanwhile, the Punjab government has formed a high-level team to probe the security lapses during the Prime Minister’s visit to Punjab on Wednesday.

The two-member committee has Justice (Retd) Mehtab Gill of the Punjab and Haryana High Court and Anurag Varma, principal secretary of the Department of Home Affairs and Justice.

The committee will submit its report within three days.

Meanwhile Ram Nath Kovind, President of India, has expressed his concern over the incident of security breach. The prime minister met the president briefly today.