Sea of humanity welcomes Modi in Kolkata; Assam no different 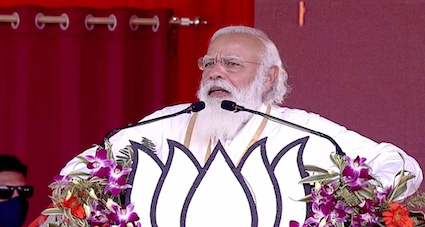 Prime minister Narendra Modi was welcomed by a sea of humanity in Hooghly, Kolkata today, a sight which would make West Bengal chief minister Mamata Banerjee toss in her bed all night.

A video posted by BJP IT cell chief Amit Malviya showed camera wasn’t able to capture the whole expanse of a cheering crowd which greeted the prime minister with thunderous applause and full-throated greeting of “Modi, Modi.”

Modi chose the moment to lay into the ruling Trinamool Congress with his customary straight talk.

“Centre has provided the State government with more than Rs 1,700 crore to make water reach every home in Bengal. But only Rs 600 crore has been spent so far by them,” said Modi “So those going thirsty, aren’t they the Daughters of Bengal?”.

It was a jibe at Mamata Banerjee’s election slogan, exhorting people to “Vote For Own Daughter.”

Said Modi: “Jal Jeevan Mission is more important for Bengal because out of over 1.5 crore rural households, only 2 lakh had tapwater connections. We’ve already provided 3,6 crore tapwater connections pan-India but only 7 lakh in Bengal (have been managed) due to the state government’s poor performance.”

Modi didn’t miss out at the neglect of the State government on Centre’s Ayushman Bharat scheme. He said lakhs of people in Bengal haven’t been able to receive free treatment worth Rs 5 lakh under the scheme. “This is the kind of hurdle Mamata Ji’s government has formed between people of Bengal and development,” he said.

Moved by the sight of crowd, Modi said the enthusiasm and energy of the assembled people was a message from Kolkata to Delhi. “Now West Bengal has made up its mind for “poriborton (change),” he said. He said the BJP government should be formed in the state not just for political “Poribartan” but for “asol Poribartan” in the state. “Lotus will bring the “asol Paribartan” the youth aims for,” he said.

Prime Minister was in Bengal to inaugurate the extension of the Metro railway from Noapara to Dakshinesewar and flag off first service easing out access to Kali Temples at Kalighat and Dakshineshwar, third line between Kalaiknda and Jhargham.

He will also dedicate doubling of Azimganj to Khargrhat Road section, a part of Howrah-Bandel-Azimganj station and 4th line between Dankuni and Baruipara of Howrah-Bardhaman Chord Line and 3rd line between Rasulpur and Magra.

Earlier today in Assam, Prime Minister accused the previous governments of neglecting the state and the northeast and asserted his commitment to the development of the region.

“Those who ruled for decades since Independence believed Dispur was too distant from Delhi. ‘Dilli ab door nahi aapke darwaaze par hai‘ (Delhi is not far now, it stands at your doorstep),” he told a massive gathering after dedicating to people, inaugurating and laying the foundation of a slew of projects worth over Rs 3,300 crore.

Modi also said that he will visit Assam and other poll-bound states as many times as possible before elections are announced, likely in the first week of March.