Shah brings Chennai on feet as he does himself: AIADMK says would remain an ally 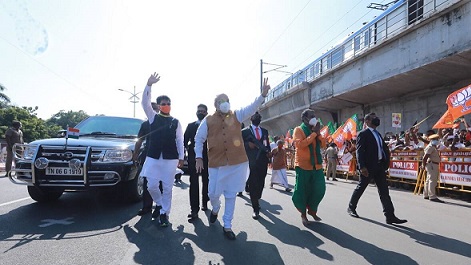 Union home minister Amit Shah took everyone by surprise when he got out of his heavily escorted car and greeted people on a busy GST road in Chennai on Saturday. But that wasn’t all—by the time the dusk descended in this southern city, the ruling AIADMK had agreed to remain an ally of BJP in the Tamil Nadu assembly elections in next six months.

Shah brought the house down when he got outside his car and greeted his thousands of supporters who lustily cheered the presence of India’s home minister, waving his hand in acknowledgement. Others who broke the protocol were no less significant: They being Tamil Nadu chief minister E. Palaniswami and his deputy O Panneerselvam who went to the airport to receive him.

Shah was accompanied by CT Ravi and L. Murugan, BJP’s national general secretary and party-in-charge in the state.

Shah is on a two-day visit to the state.

It is always great to be in Tamil Nadu. Thank you Chennai for this love and support. https://t.co/pxl5EaZ6on

Things only got better by the evening as it was learnt that AIADM would continue to be in alliance with the BJP for next year’s assembly elections. It was confirmed by the chief minister and his deputy no less. This announcement was made at a government function to welcome Shah. Palaniswami said he was confident that the AIADMK-BJP alliance would romp home with more seats and retain the power in the assembly elections.

The announcement put to rest the speculation that AIADMK might part ways with the BJP following the recent Vetrivel Yatra controversy that led to finger-wagging from both the camps.

The Union home minister laid the foundation stone for phase-two of the Chennai metro rail project built at a cost of Rs 61,843 crores and virtually dedicated the new reservoir at Thervaikandigai worth Rs 380 crores to the people.

The Home Minister is in Chennai lay the foundation for various infrastructure projects worth a whopping Rs 67,378 crore along with the launch of an elevated corridor on Coimbatore-Avinashi Road (Rs 1,620 crore), construction of a new barrage across the Cauvery at Nanjai Pugalur in Karur district (Rs 406 crore), Chennai Trade Centre extension project (Rs 309 crore), Indian Oil Corporation Terminal at Vallur in Tiruvallur district (Rs 900 crore), Lube plant at Amullaivoyal (Rs 1,400 crore) and a new berth at Kamarajar port in Chennai (Rs 900 crore) to boost cargo handling, as per an official statement.

“Sometimes I heard DMK leaders speaking of injustice done to Tamil Nadu. DMK and Congress were at the Centre for 10 years. We are ready for a debate on whether Tamil Nadu got more help in those 10 years or during the tenure of our government,” he added.

“When Modiji visited Sri Lanka, he didn’t forget Jaffna. He visited Tamil colonies there and meet with Tamil brothers and sisters. He laid the foundation stone for providing them houses. Over 50,000 Tamils will get houses and damaged temple will be rejuvenated in Sri Lanka,” Shah said.

“Modi government has announced to establish defence industrial corridor projects in only two states of the country and Tamil Nadu is one of them,” said Shah.

The Union home minister also paid tribute to former chief ministers MGR and Jayalalitha at the event on Saturday.