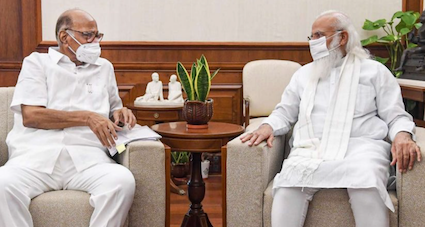 Prime Minister Narendra Modi and Nationalist Congress Party (NCP) chief Sharad Pawar met at the former’s residence in New Delhi for a nearly hour-long over issues of national interest on Saturday. This was also the NCP chief’s first one-on-one meeting with PM Modi since 2019.

Following the meeting, Pawar, in a tweet, said, “Met the Hon. Prime Minister of our country Shri Narendra Modi. Had a discussion on various issues of national interest.” The meeting came two days before the monsoon session of Parliament beginning July 19. This meeting comes a day after Pawar’s meeting with Union Defence Minister Rajnath Singh along with ex-Defence Minister AK Antony.

The meeting between Sharad Pawar and PM Modi is significant as it comes amid rumblings within the Maha Vikas Aghadi (MVA) government in Maharashtra, a three-cornered alliance formed by the Shiv Sena, NCP, and Congress.

There were also speculations that Pawar will be the Opposition’s candidate for the President’s post, election for which is due in 2022. However, NCP has dismissed such reports.

During his interaction with PM Modi, Sharad Pawar said he had sought time concerning the letter about cooperative banks being monitored by the Reserve Bank of India.

Meanwhile, Union parliamentary affairs minister Pralhad Joshi has called an all-party meeting at 11 am on July 18 in which Prime Minister Narendra Modi is likely to be present.