She was no one’s daughter, without caste, didn’t die too: A horror best told to our own women 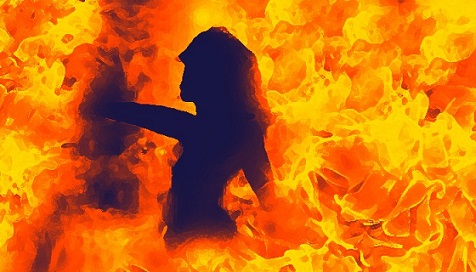 Anjali Tiwari apparently was no one’s daughter. She had no caste too. Hers was no death too. For if she was, our English mainstream media wouldn’t have blanked the news.

A woman attempts to self-immolate herself next to state assembly in Lucknow. After three days she dies on Thursday.  The regional press digs deep and brings out horrifying details: A man rapes Anjali, offers to marry her to avoid arrest, she succumbs and marries, the man leaves for abroad without her, stops sending her sustenance for years, his family shuns her and she, in desperation, sets herself on fire to draw attention.

But she failed. Our mainstream English media isn’t interested. It’s not keen to know why Anjali did what she did; who was the man who turned her life into a nightmare and finally into an induced-murder, what it was that her rapist-husband wanted and she couldn’t do, and above all a woman in a hospital ward, with third degree burns, those hellish final days when we as humans can’t even lift a bowl for a second without protection from microwave. All this is not news to our “sensitive” mainstream media.

I scanned my morning papers: Not a word on Anjali’s death. I looked at their internet editions too: Not a word. I tried looking at how they covered the news in their local Lucknow editions ( This report is a help): All bland reports where a Congress leader is shown to have coaxed the woman to self-immolate herself to draw attention. But why was she so desperate? Apparently not worth our English media’s time.

A few things further didn’t connect. Wasn’t Anjali a woman? Didn’t it move the heart of our Priyanka Gandhi who braved a scorching sun and lathis and set on foot to reach Hathras where it involved the death of another woman? What about Rahul Gandhi? Shashi Tharoor and Derek O’ Brien? Sitaram Yechury? Akhilesh Yadav? Asaduddin Owaisi? Chandrashekhar Azad? All those placard-bearers who swarmed around India Gate on Hathras? Is Yogi Adityanath no longer a villain to them? No further demand on his resignation? Where are those instant editorials; those grave-looking professors of JNU, Jamia and Ashoka University in our Opeds; those human-right activists, NGOs; National Commission for Women anyone? A cry from EU Parliament? From US Congress? The UN condemnation as it was with Hathras?

You must have guessed the reason by now but let me put it anyway: Anjali was raped by a Muslim man; had changed her name to Ayesha; but not enough to convert to Islam which repulsed her husband Asif and finally his family. It cost Anjali her life, a suicide-mode which is worse than when one hangs oneself with the ceiling or throws oneself in front of a metro on jumps from a shopping complex.  But still it isn’t a Love-Jihad; It isn’t a Hindu-Muslim like Upper Caste vs Dalit theme; it isn’t social inequality; it isn’t gender-divide; it isn’t patriarchy.

So if I may ask are you indifferent because Anjali was a Hindu? Are you indifferent because the rapist-husband-murderer was a Muslim? And don’t give me this xxxshit that I am looking from the prism of religion when you do this all the time? You would lose your cool and paint the town red for a Tanishq Ad has been taken down: but not when somebody is so desperate that she chose such a high-profile place in the belief that if a Hathras village can’t be ignored, Lucknow assembly would surely spark the nation’s outrage.

Anjali wasn’t wrong in her calculations. She must have watched the last few days how Hathras has been turned into an international event. She must have trusted our Rahuls and Priyankas and Tharoors and a “sensitive” media to come to her aid if she did something more sensational. She was so desperate she was willing to risk her life. But none came. The mistake Anjali did was to forget that she is a Hindu and that her oppressor was a Muslim. That in this country #HinduLivesDon’tMatter as against #MuslimLivesMatter.  That perhaps Left/Liberal/Islamist ecosystem isn’t just a figment of our imagination. That not just her rapist-husband, all these had also played their role in her murder.