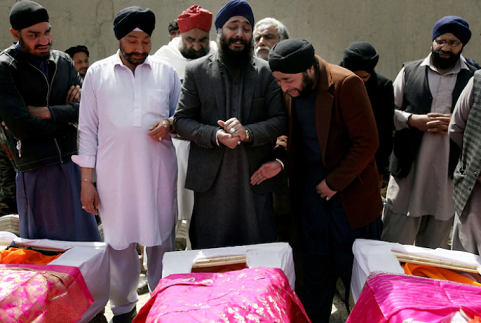 The anti-Citizenship Amendment Act (CAA) protestors have accused the Indian state of discriminating against Muslims. But these synchronized protests have no answer why their own stance shouldn’t be treated as hostile to other religious groups, more so when they have refused to either negotiate with the Modi government or the Supreme Court, both of whom had offered a dialogue.

Once the Coronavirus pandemic is over, whenever it is, and CAA is again forced into the news, it would be worth pondering over the pathetic state of Sikhs and Hindus who are living in the Islamic state of Afghanistan.

A once-thriving community of over 2.5 lakh Hindus and Sikh have now been reduced to 700 in the mountainous country, the lowest numbers ever. Most of they are fleeing and seeking refuge in India and Canada, among other countries, knowing well that any day a bullet would arrive unannounced and find a target on their foreheads.

While India is embroiled in agenda-driven anti-CAA protestors, a group of Afghan Sikhs and Hindus in Canada and Europe are volunteering to sponsor the exodus of those remaining in Afghanistan. In Canada’s parliament, legislators are asking the country’s immigration ministry for a special program for Afghan Sikh and Hindu refugees. It should be a matter of shame for Indians to see their brethren being left out in cold only because a sponsored, agenda-driven anti-CAA anarchy doesn’t want the CAA to be implemented.

It’s not a new phenomenon but the persecution of Hindus and Sikhs has only intensified in recent years. All those in US Congress or EU parliament or in UN or the Human Rights Group, networks such as Amnesty International or Open Foundation of notorious George Soros have chosen silence over this unhindered blood-shedding of minority communities in India’s neighbouring Islamic countries of Pakistan, Afghanistan and Bangladesh.

Between 1992-1996, all Hindu temples in Kabul’s old city were destroyed though most remember blown-up Buddha’s towering Bamyan statue, situation 130km northwest of Kabul, dating back to the sixth century. In 2018, 19 people, mostly Sikhs, were killed in Jalalabad. This March, in a Gurudwara, 25 Sikhs were killed in a brutal attack.

The exodus of Hindus and Sikhs have since been in an accelerated loop. Most are seeking out India though a large number is also looking to migrate to Canada and West through the help of Sikh organizations.

In August, a group of 176 Afghan Sikhs and Hindus had come to India on special visas. It was preceded by similar batches coming in March and July, seeking sanctuary for themselves and their families.

The hostility in an increasingly fundamentalist country, now virtually in control of Islamist Talibans, is becoming suffocating. In the 1990s, under the Talibans, Sikhs and Hindus were asked to identify themselves by tying yellow armbands. Most have lost homes and business and lands, illegally seized by a hostile majority and unprotected by the State.

An AP report has quoted a Sikh, who preferred to remain anonymous, claiming that his sister, nephews and son-in-law were those who perished in the temple attack of March. He is now in India, having escaped in a batch. This Sikh had taken refuge in a Sikh Gurudwara (Temple) in Kabul after warlords seized his home in 2001.

In Afghanistan, the difference between Hindus and Sikhs is minimal. Both suffer same anxiety and same heritage. The two communities have been driven to support each other. They both gather under one roof or temple to worship.

The Afghanistan government set up a chair in the national assembly for religious minority in 2010 and there have been since been two Sikh representatives, yet these are no better than “symbolic.” They neither have the political representation nor security.