Sindhu would now have ice-cream with PM Modi, says a beaming father 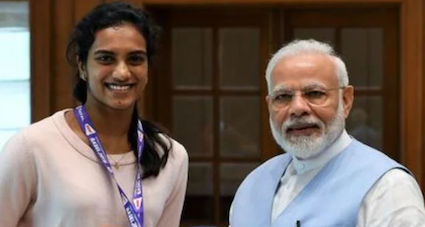 Indian shuttler PV Sindhu won a Bronze medal at Tokyo Olympics on Sunday after defeating the eighth seed China’s He Bingjiao and now she will have ice cream with Prime Minister Narendra Modi in New Delhi, her father PV Ramana said.

Sindhu’s father was talking to the media with his wife when he expressed that he felt proud at the victory of their daughter. While congratulating her, he said that Prime Minister Modi encouraged Sindhu to win the Olympics.

“The encouragement PM Modi had given to her, he had said, ‘you go, we will have ice cream when you come back,’ so she will now definitely go and have ice-cream with the Prime Minister,” he said at a press conference.

“I am happy that she is the first Indian woman to win two consecutive medals at the Olympics. She has brought name and fame to the country,” he said about her daughter.  He said that while he was hopeful that she would win the gold medal, winning the bronze is also a huge achievement.

It so happened that PM Narendra Modi had interacted with the Indian contingent for the 2020 Tokyo Olympics via video link last month and PV Sindhu also happened to be one of them.

During that session, PM Modi jokingly asked Sindhu about her diet restriction and recalled if the chief national coach of the Indian badminton team Pullela Gopichand had again prohibited her from eating ice cream like 2016 Rio Olympics.

Responding to this, she had revealed that she had to control her diet before the Olympics. PM Modi, then, promised to have ice cream with her after the Olympics games.

Commending the shuttler’s brilliant performance, Prime Minister Narendra Modi took to Twitter and said that she is India’s pride.

“We are all elated by the stellar performance by @Pvsindhu1. Congratulations to her on winning the Bronze at @Tokyo2020. She is India’s pride and one of our most outstanding Olympians. #Tokyo2020” PM Modi wrote.