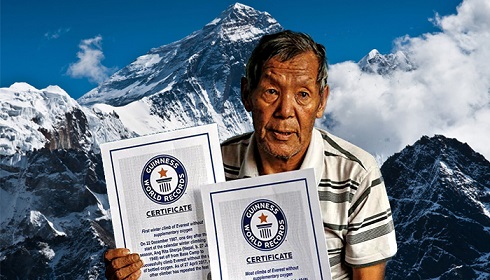 The 72-year-old Nepalese took his last breath on September 21 at his home in Nepal’s capital, Kathmandu. Ang Rita was suffering from brain and liver ailments for a long time and died due to the same, his family informed.

Famously known as “Snow Leopard” for his brilliant and unique climbing skills, Ang Rita was an inspiration for climbers and Nepal’s climbing training courses have also drawn from his experiences and skills.

The mountaineering legend was awarded a prestigious Guinness World record certificate for making the most number of successful ascents on the 8,848-meter Mt Everest without using supplemental oxygen, a record that remains unequalled.

Another Sherpa, Kami Rati holds the greatest number of ascents of Everest, having done it 24 times, but he was known to use bottled oxygen.

Thousands of people have surpassed the Ang Rita’s record of climbing Mount Everest but doing so without oxygen remains rare.

Most of the climbers carry supplement oxygen cylinders when moving to peaks higher than 8,000 meters, altitude mountaineers call the “death zone” because the air is so thin but Ang Rita never felt of carrying an extra cylinder of oxygen.

During his one of the winter expeditions in 1987-88, when he, along with his Korean mate, lost his way due to extreme weather conditions, all they did was an aerobic exercise to keep themselves warm.

His death was described as a major loss to Nepal and its climbing community. President Bidya Devi Bhandari, while sharing her condolences, tweeted, “His demise is an irreparable loss to the country’s climbing industry”

Fellow climbers also paid their tribute to the legend following news of his death. “He was as active as snow leopards on the mountains and it was unique,” Ang Tshering Sherpa, Nepal’s veteran mountaineer and former president of Nepal Mountaineering Association told the BBC.

Descended from Tibetan heritage, the Sherpa was born in 1948 in the Yillajung, a tiny village in the Everest region of Nepal. While he spent his life under the shadow of Mount Everest, his first climb was to Dhaulagiri, the world’s seventh-highest mountain.

It was his first job as a porter for which he had no shoes or equipment. Apart from climbing to Everest 10 times, Ang Rita climbed Dhaulagiri and Cho Oyu four times and Kanchenjunga- the third-highest peak, once and all of these without using bottled oxygen.

Ang Rita, whom the former president of Nepal Mountaineering Association, Ang Tshering referred to as the ‘strongest Sherpa of his time’, challenged the science and human physiology with his extraordinary skills.

His colleagues talked about his jovial and carefree nature and said he never worried about his future and enjoyed his life to the fullest.

He stopped climbing after the 1996 Everest disaster, in which eight people died in a fierce blizzard but continued to work as a trekking guide and base camp manager.

After the death of his wife Nima Chokki, he moved to Kathmandu to live with his daughter Dolma, where he took his last breath.