So what’s about Rahane and Jadeja we didn’t notice all these years? Is it time to check their bats? 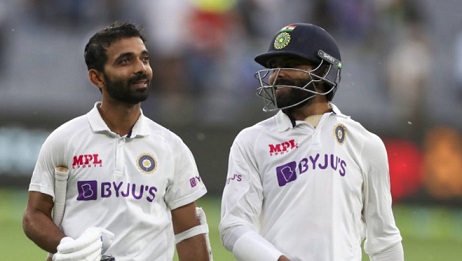 Cricket is a great imposter and that’s why you should empathize with commentators and journos, even if they happen to be former Test captains of England or Australia, Michael Vaughan and Ricky Ponting in this case, who were rolling up the summer and predicting a 4-0 whitewash for India.

Now both could be pardoned—or lampooned—for both were coming from the position of their great experience of Australia’s pitches where one barely won and the other barely lost and both could have cast their eyes on the two squads—the thrill of 36 all out on visitors’ nose and the captain by the bedside of his expecting wife–and cocked up their voice that extra pitch on the buzzing microphones.

This wasn’t all. They also must have factored in Mohammad Shami laid up for the series, a man who could run through a side (Remember, Wanderers 2018); and that Jasprit Bumrah can’t bowl from both ends; and that Steve Smith wouldn’t let an Adelaide be a Ahmedabad for Ravichandran Ashwin and his genius and inhospitable tracks for spinners would show the Indian his place.

And man those selections. Where is KL Rahul? Is he out only because you can’t put out Ajinkya Rahane since cricket doesn’t entertain non-playing captains? Why Shikhar Dhawan and Hardik Pandya on plane home? Hanuma Vihari? I mean, come on. And then you could have hardly fancied a replacement from home, even if he was a Viv or Don, since Coronavirus and quarantine are minefields impossible to negotiate. Ask Rohit Sharma.

So spare Ponting. Spare Vaughan. Spare all of us who were talking on net, dusting up cricket almanacs on shelves, and nodding 4-0 only given none of the teams with five worst scores in Test history have ever prevailed in the next match or series.

But here we are, toasting a eight-wicket win at MCG, yes MCG, which, let me say, we could have won by 10 wickets if not by an innings had Rahane been not run out and Umesh Yadav not limped off the field. And who would’ve have given Jadeja a chance to play in this Test, leave alone a stellar role? Cricket, that imposter, I say.

You shouldn’t choose heroes by degrees and so let’s have the same eye for both Jadeja and Rahane.  History would be no less grateful nor would be cricket that imposter for we rarely win in Australia and it’s a venue where we suffer whitewashes like faithful husbands do to shrieking wives—a matter of routine.

Jadeja and Rahane must never be mistaken as poles apart as one appears flamboyant and the other sedate but Jadeja is miserly at the bowling crease and Rahane could unleash expansive drives, though copybook of course, from his batting stance.

Jadeja played his first Test when I had already exited the Press Box for the last time in a quarter century but Rahane I remember for that forgettable tour of England in the summer of 2011 when this little man from Mumbai, with an eye-catching first class record, was pulling and hooking which Mumbai batsmen could do, having learnt their trade on relentless cricket on all kind of pitches, some of which are matting. Think of Sunil Gavaskar, Sachin Tendulkar and Rohit Sharma and you would agree.

(A more nuanced definition of a Mumbai batsman is run-accumulator and that you must pardon to a Delhite. But it’s not the occasion to walk down that slippery road. After all who was the first to hit six sixes in an over in first class cricket in India?)

A thing which might have taken even seasoned pro by surprise is Jadeja the batsman. He has been very consistent at the crease over the last year or two but to do so, having been recalled, against a quality pace attack, against the backdrop of 36 all out, should stop our search for a Test all-rounder. A flowering Hardik Pandya of course would be a bounty but Jadeja is now good for both home and abroad.

I know Indian captains by instinct ask for a pacer-allrounder and Jadeja is no Vinoo Mankad or Richie Benaud but come on, even Sanjay Manjrekar won’t call him bits-and-pieces today. And his fielding is good enough to have earned him a regular place if it was the Indian Test sides of 60s and 70s where a fielder from long on or third man didn’t mind rolling the ball back to the centre of action.

Rahane too is a batsman rediscovered. We all have lamented at his failures against spin at home, at worst being tied to the crease, and he always lacked that glam quotient in shorter formats, not to say the absence of a loud mouth which could advance you by inch and feet. We all have bemoaned at his drying hundreds at crease. 40s and 50s were becoming norms and those were not good enough.

So Australians helped him in the field but that’s nit-picking. It was not a benign pitch as Australia for not more than 200 in both innings illustrate. He played to his strength and stayed in the moment. May be the good words around on his captaincy on the first day brought that good feeling and humming on the lips.

I checked with Ravi Shastri after the Melbourne Test and he was good enough to respond on the success of Jadeja and Rahane with the bat. “Both play late” was his crisp message. Funny, we never came to dissecting their techniques all these years. That’s one aspect of success—and failure–which makes you look for reason.