Sonia Gandhi, and not Teesta, were behind the conspiracy: BJP 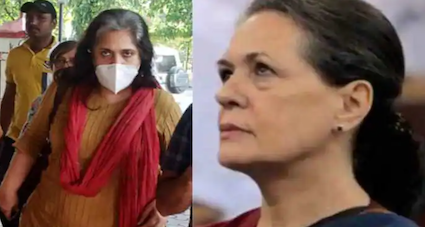 The BJP, in a direct attack on the Congress, held Sonia Gandhi responsible for the conspiracy following the Gujarat riots and also alleged that Teesta Setalvad was just a pawn following instructions.

The Gujarat crime branch arrested Teesta Setalvad on June 26, a day after the Supreme Court gave a clean chit to PM Modi in the Gujarat riots case.

Ex-Gujarat DGP Sreekumar was also apprehended on June 25 and action is also being taken against Ex-IPS officer Sanjiv Bhat in a fresh case of forgery, criminal conspiracy and influencing criminal proceedings to cause injury.

BJP spokesperson Gaurav Bhatia, accusing BJP’s interim President Sonia Gandhi to be the ‘mastermind behind the conspiracy to malign Modi’ said, “Teesta Setalvad was just a small branch to spread communal hatred, the main Headquarters was in the Congress party. It was Sonia Gandhi who would direct on the way to interfere with the judicial process and as has been proved according to the statements made by an associate of Teesta Setalvad, they were not fighting for the riot-affected families, their main objective was to destroy the political career of the then Chief Minister Narendra Modi.”

Setalvad, Sreekumar and Bhatt were accused of abusing the process of law by conspiring to fabricate evidence with an attempt to frame innocent people for an offence punishable with capital punishment in connection with the 2002 Gujarat riots. The trio was booked under sections 468, 471 (Forgery), 120 (B) (Criminal conspiracy), 194, 211 and 218.

Amit Shah further attacked the UPA government for helping the NGO. “The SC said Zakia Jafri worked on someone else’s instructions. NGO signed affidavits of several victims and they didn’t even know. Everyone knows Teesta Setalvad’s NGO was doing this. When UPA Govt came to power at that time, it helped the NGO,” Home Minister Amit Shah said.