State and Indian media: The gloves are off; Where are the arbiters? 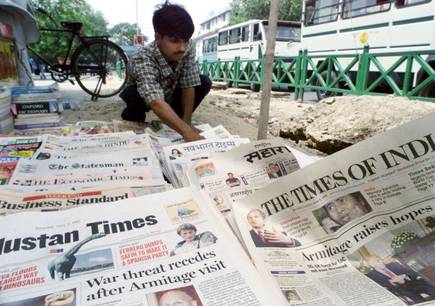 I am in the middle of writing a book on World History where I show strands vastly different to the narrative we have been fed through newspapers and academia. My compass is big, covers all continents, and this endeavour would take up my four years by a modest estimate.

One of the problems I am confronted with is references. Most books I pick have references which appear untrue. For instance, Pyarelal Nayyar, the personal secretary of Mahatma Gandhi mentions an incident from Second Boer War (1899-1902), quoting Natal Mercury where the date is before the event happened. It’s not typo, there are several such instances.

We are not talking of biases here. That is given in most cases. You pick facts and incidents to your liking. My issue is with “creating” those facts and incidents. People in social media, newspapers, TV channels are doing it all the time. These “fakes” are repeated, read or seen by millions and shape people’s opinions—and actions.

This is the background in which I want the present issue of journalists in India being hauled up be seen. Two prominent names, Sudhir Chaudhary and Arnab Goswami, are such. The are perceived to speak the Centre’s line and it has put them in crosshairs of opposition states. In Himachal Pradesh, 14 FIRs have been filed against five reporters. This is likewise in UP, Gujarat, West Bengal, Rajasthan and in many other states. Indian Express is moving heavens on one of their reporters facing action for what Delhi Police believes to be “fake news” on Tablighi Jamaat’s head, Maulana Saad. Is media’s freedom a thing of the past?

There are no clear-cut answers and there would never be. None of us can expound an opinion and say: Yes, that’s it. How can journalism survive if State is the Big Brother watching them all the time? How would State function if media is like an ass in a pottery shop, to borrow a metaphor from Aesop’s fables.

None of us would deny that State is prejudiced; and media is biased. Or that we don’t live in the world of corporate media. Power and money, the two essential evils, are working all the time to grow bigger today than they were yesterday. It could only be at the cost of citizenry, the sheep to be sheared, Where are the arbiters in this toxic, noxious air?

There could be many arbiters but let’s begin with judiciary which has the final word. What do they go by with? Our Constitution doesn’t provide freedom to press as an enshrined Article. Most of it is presumed under Article 19 (1-a). This is the Right to Freedom of speech and expression to individuals. This is Liberty, the root of democracy.  Ideally, media shouldn’t be interpreted from this prism. Unlike individuals, media is a “watchdog” for public interest which gives them privileged access to men and matters.

Yes, there is Press Council Act of 1978. It’s to ensure freedom of press as well as pull up media if untruthful. In essence Press Council is just a talk shop. Most members are hand-picked. Editors’ Guild of India and News Broadcasters Association (NBA) are no better. Their credibility is zilch. In essence, it’s a Big Boys Club who keep public interest out of their rounds of drinks.

Ombudsman, a neutral voice of credibility, was once deemed an important self-regulatory organ, to keep the content truthful. It has been a joke on us for last two decades if not more.

Then there are unseen arbiters, we the readers, the citizens, the suckers. Both the State and media would prefer us to be blindfolded, to be goaded into alleys of their own mischiefs. We don’t get the truth from either; yet we tilt one way or the other. An irony: Those who can’t do without us, have little of our interest on their minds.

The time has come to draw a line in the sand. Ambiguity must give way to well-defined laws. Journalists must follow the time-tested dictums: Present both sides of story; name your source who wish to be quoted or don’t use it at all. I agree it’s not possible in political reporting but don’t let a good story come in the way of a patient’s good who is on a ventilator.

I also know it’s easier said than done: your editors are mostly handpicked by your employers to serve their business or political agenda. That “little journo” on the desk, the sub-editor, also is prone to rejig your story in a manner which could induce a saucy headline and cause you embarrassment next morning. I doubt if there is any reporter who hasn’t muttered a swear to an editor/sub-editor on the final output.

State, on their part, must not allow mischief by press. But it also shouldn’t use the long arm of law to settle personal scores or come down on an investigative story. Mostly, States should limit itself to denying a news or offering a clarification. Or be a mouthful like Trump is to despicable US media. But state action or imprisonment isn’t on. Individuals could evoke defamation suit: Like Sonia Gandhi should have done against Arnab Goswami. It was shameful to involve a state machinery for her personal score.

Press is the breath of democracy: All you need is a strong filter. Putting a lid would suffocate it to death.