Stolen History: When Thousands of brahmins were killed in wake of Gandhi’s death 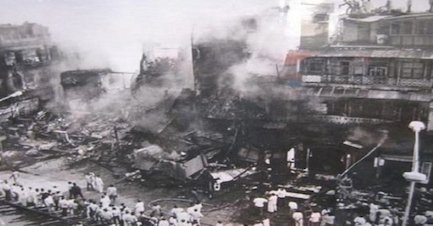 It was early days in 1948. Around five months had passed since India gained independence. Mahatma Gandhi was distressed after witnessing the communal disharmony among Hindus and Muslims. And just like he used to extract concessions from Britishers, this time too, he decided to fast: No food or drink but “water with our without salts and sour lines” till he was satisfied “that there is no reunion of hearts of all the communities brought about without any outside pressure, but from an awakened sense of duty.”

Dressed as always in his homespun, sac-like dhoti, and leaning heavily on a staff of stout wood, it was 30th January when 78-year-old Gandhi was shot by Nathuram Godse in the luxurious gardens of Birla House in the presence of a thousand of his followers, whom he was leading to the little summer pagoda where it was his habit to make his evening devotions.

While the nation was mourning the death of Gandhi, the entire media and people missed out on the riots that took place in Bombay (Now Mumbai). With Gandhi’s death, Bombay saw death, destruction, and killings. Nathuram Godse happened to be a Maharashtrian Brahmin- of Chitpavan sub-caste, people took political advantage of the situation and engineered a cruel, cold-blooded genocide against Chitpavan Brahmins also known as Konkanastha Brahmin.

(It’s a Hiindu Maharshtrian Brahmin community inhabiting Konkan, the coastal region of the state of Maharashtra, coastal and north region of Karnataka in India).

Mobs of anarchists went berserk to commit indiscriminate massacres and bloodbaths to target innocent Brahmins to avenge the killing of Mahatma Gandhi, who swore by “Truth and Non-Violence” all his life. Brahmins were killed, Brahmin women were raped, shops and houses were set on fire, livelihood destroyed, and many Brahmins were forced to flee to save their lives and future.

Mobs comprising allegedly Congress workers handpicked 15 Brahmins in Bombay to butcher them the same midnight. In Pune, 50 innocent Brahmins were slaughtered. A family in a remote village called Kapahare was burnt alive because their surname was Godse, although the family had no connection with Nathuram Godse.

The mob didn’t even spare the freedom fighter, Veer Savarkar, and attacked his residence. When they didn’t find him, they dragged his brother Narayan Rao Savarkar and his family out of the house and pelted stones on them. He succumbed to the injuries that he received that night.

Brahmins who were wealthy migrated to the US and the other countries whereas those who couldn’t escape got located themselves in the different parts of India to save their coming generations.

On 5 February 1948, a Hindi daily, “Ushakal” from Jabalpur had reported, thousands of Brahmins were attacked in 400 villages of Satara district of Maharashtra. Their 1500 houses were burnt down.

Estimates state that 8000 Brahmins were killed, with no particular number of how many were rendered homeless.

Now the question comes how did these rioters communicate with each other in such a short period and that too when the households hardly had a landline, phone, or anything. Social media wasn’t even a thing then.

Wasn’t then Prime Minister Jawahar Lal Nehru aware of the death, destruction, and despair committed against Brahmins in Maharashtra?

Of course, he had full knowledge about the brutal atrocities inflicted upon innocent Brahmins. That RSS was blamed even without any evidence was fatal. Nehru was relentless in his condemnation of the RSS. He repeatedly warned the chief ministers that they must not let down their guard.

Such were his words: “It would appear that a deliberate coup d’etat was planned involving the killing of several persons and the promotion of general disorder to enable the particular group concerned (RSS) to seize power”

Each year, the country mourns the death of Gandhi – all political parties, by every political leader but unfortunately, no one, even today, dares to talk about the incident. For HinduLivesDon’tMatter.