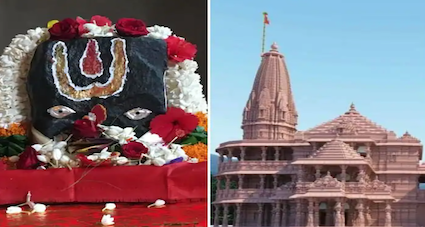 While the construction of a grand Ram Temple is underway in the holy city of Ayodhya, a stone from Sita Eliya, the place in Sri Lanka where Goddess Sita is believed to have been held as a captive, will be brought and planted in the temple complex. The stone is expected to be brought to India by Sri Lankan High Commissioner-designate to India, Milinda Moragoda.

The announcement was made by the high commission of India in Colombo on Twitter.

“A stone from Sita Eliya in Sri Lanka for the Ram Temple in Ayodhya will be a pillar of strength for India-Sri Lanka ties. This stone was received at Mayurapathi Amman Temple by HC-designate of Sri Lanka to India Mr Milinda Moragoda in presence of the High Commissioner,” the high commission tweeted.

“It will celebrate multifarious commonalities between the countries and also encourage more tourism and exchanges between the two peoples,” it further said in a subsequent tweet.

Champat Rai, general secretary of the trust, had said earlier this month that the Ram Temple in Ayodhya is likely to be completed in about three years.

The foundation stone of the Grand Ram temple in Ayodhya was laid by Prime Minister Narendra Modi in August 2020. Shri Ram Janmbhoomi Teerth Kshetra Trust has been entrusted with the task of Ram temple construction in Ayodhya.