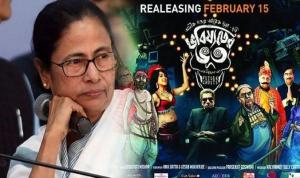 First the Election Commission directive against four top cops from doing poll duties in West Bengal. Now a rap on the knuckles by the Supreme Court on Mamata Banerjee’s West Bengal for abusing state power in clamping down on a movie not to her liking.

The Supreme Court reprimanded West Bengal government and directed it to pay Rs 20 lakhs as  compensation to the film-makers of Bengal film, ‘Bhobishyoter Bhoot’ (Future ghosts) after founding it guilty of “clear abuse of public power”  for employing the state Intelligence machinery in abruptly pulling down the film from running.

A Bench consisting of Justices D.Y. Chandrachud and Hemant Gupta reprimanded the State government for making an “unconstitutional attempt to invade the fundamentals rights of the producers of the film, the actors and the audience.”

The court further passed a restraint order against Mamata Banerjee government from interfering with the lawful screening of the movie. In uncertain terms, the court ordered the official machinery to ensure the movie’s exhibition.

“We have no manner of doubt that this was a clear abuse of public power….. The West Bengal police had overreached their statutory powers and have become instruments in a concerted attempt to silence speech, suborn views of critical of prevailing cultures and threaten law-abiding citizens into submission”.

Earlier, a petition was filed by film’s producers, advocate Indira Unninayar, Kalyanmoy Chatterjee and Indibility Creative Pvt Ltd., and was represented by senior advocates Sanjay Parikh and advocate Rukhsana Chaudhry. The producers informed the bench that they received an order from Joint Commissioner of Police ( State Intelligence)  for pre- release screening, which the producers refused on the ground that the film has been cleared by Censor Board of a India.

Justice Chandrachud observed, “ The power of the State is what people give it. Freedom is not subject to power, but power is answerable to freedom.”

The film is a socio- political satire about a gang of dejected ghosts, who are rendered homeless after the dilapidated building where they had taken shelter is razed and converted into multi-storey building. Thereafter, they wish to make themselves relevant in future by rescuing the marginalised and obsolete.

The critics have termed this movie as a fun film but how it hurts the political sensibilities is Mamata Banerjee is anybody’s guess.