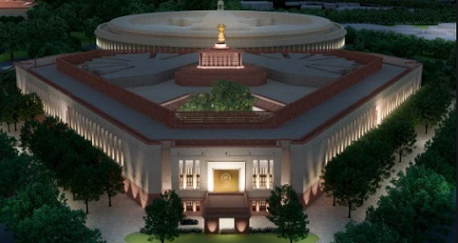 Supreme Court has approved the Centra Vista project by a 2:1 verdict.

The bench of Justices AM Khawilkar, Dinesh Maheshwari and Sanjiv Khnna approved the project under which the new Parliament building is to be built.

A batch of pleas had questioned several aspects, including the environmental clearances granted to the ambitious project.

Justice Khanwilkar said that Central government doing it under DDA Act is legally valid to do so and the impunged notification stands confirmed. Further, the recommendation by the Environmental Committee is also just and legal.

Justice Khanna was the one who differed with his other two colleagues.

Justice Khanwilkar directed for the smog towers to be installed too, to be carried out during the construction.

In the minority opinion, Justice Khanna said, “I have agreed on the aspect of notice inviting bid, award and order of urban commission with the opinion of respected brother Justice Khanwilkar. However, on the aspect of change of land use, I have held that the same was initiated as being bad in law. Two reasons for that are – No disclosure for public participation and no prior approval of the Heritage Conservation Committee. I have accordingly remitted the matter of the Heritage Conservation Committee.”

The Central Vista, declared in the 1962 Master Plan of Delhi, is a heritage project. It mentions that the new Parliament Building Complex will be spread over 64,500 square metres, bigger than the present Parliament building to house  888 MPs. Moreover, all parliamentarians are expected to get separate offices in the new complex.

Prime Minister Narendra Modi had laid the foundation stone on December 10, for the new Parliament building. “This is a day of pride for over 130 crore Indians when we are witnessing this historic moment. The new Parliament building is an example of the co-existence of the new and the old. This is an effort to make changes within oneself in accordance with the time and needs,” the Prime Minister had said.

Lok Sabha Speaker Om Birla had detailed the project to be completed by 2022 at an estimated cost of Rs 971 crores.  President Ram Nath Kovind called it a ‘historic moment’The President also called the new Parliament ‘an expression of Unity in Diversity’ in New India.

The Apex Court had made it clear that the fate of the project, which includes several new government buildings and a new Parliament House, will depend on its decision. On November 5, the apex court had reserved its verdict on a batch of pleas which had raised questions over the project, stretching for three km stretch from Rashtrapati Bhavan to India Gate in Lutyens’ Delhi. On December 7, 2020, the top court had allowed the Centre to proceed with the foundation stone-laying ceremony for the Central Vista project on December 10.